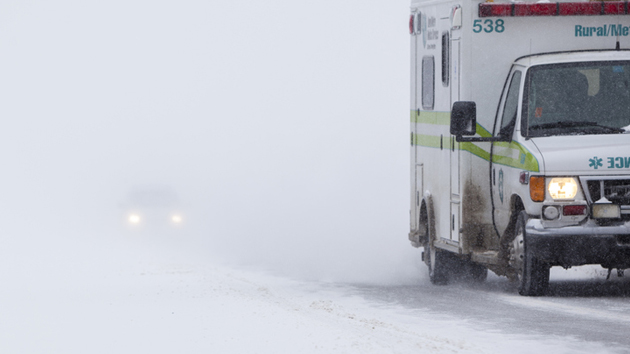 Alex Potemkin/iStock(WILLIAMSBURG, Va.) — Heavy fog and an ice-slickened highway contributed to a massive pre-Christmas 69-vehicle pileup in eastern Virginia on Sunday that left more than 50 people injured, two in critical condition, authorities said.The chain-reaction crash happened just before 8 a.m. in the westbound lanes of Interstate 64 near Williamsburg, Virginia, Virginia State Police Sgt. Michelle Anaya said during a news conference Sunday afternoon.”We do not know the cause of the initial accident, but we do know that fog and the icy road conditions were causative factors in this multi-vehicle crash,” Anaya said.Photographs and aerial footage from the scene showed a long line of crumpled vehicles, some on top of each other, near the Queens Creek Bridge, northeast of downtown Williamsburg.Anaya said 51 people were treated at the scene or taken by ambulance to one of four area hospitals.York County, Virginia, Fire Chief Stephen Kopczynski said two people suffered critical injuries, but were expected to survive. He said another 11 victims were being treated for serious injuries.”It could have been far worse and luckily there are no confirmed fatalities,” Anaya said.Anaya said the crash occurred near a construction zone.Anaya said 27 state troopers were on scene investigating the pileup and said it could take several days to determine the initial cause.With millions of people expected to travel this week for the Christmas holiday, Anaya said the crash is a wake-up call to drivers.”We always ask people to give yourselves plenty of time when you’re traveling, always wear your seatbelt, always pay attention, do not drive distracted as well,” Anaya said.