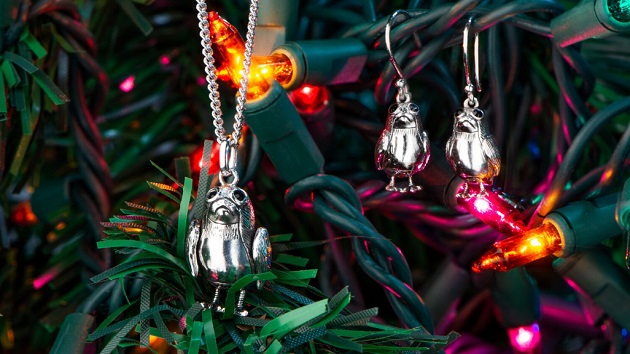 RockLove Jewelry(NEW YORK) — Ashley Eckstein is an actress, and, proudly, a “big fangirl.”However, the woman who became the voice of Jedi Ahsoka Tano on the animated series Star Wars: The Clone Wars and Star Wars: Rebels always had an issue: at 5’2″, she had trouble finding a way to let her fangirl flag fly when it came to clothing.”I wanted Star Wars clothes made for me, and at the time they didn’t exist,” she told ABC Audio. “Half of all Star Wars fans are women and girls, and you know, 85% of all consumer purchases are made by women. I thought you know, I’m not a mathematician but these numbers are not adding up. If you make us stuff, we will buy it.”It turned out to be a million dollar idea and then some. She launched Her Universe, and secured the lucrative Star Wars license from Lucasfilm — which led to clothing celebrating Marvel, Wonder Woman, Powerpuff Girls, and Dr. Who.Similarly, jewelry designer Allison Cimino started her company RockLove Jewelry in 2007 — “technically a one-bedroom apartment in Astoria, Queens,” she jokes to ABC Audio.But her unique designs found a foothold in the fan-world in 2014, with a partnership with CBS & Star Trek. That led to new licensing opportunities, and now her company creates hand-crafted jewelry that looks like it could have been worn by characters in the Star Wars Universe, in Black Panther’s advanced African nation of Wakanda or in the case of her newest line, Frozen’s world of Arrendelle.”Star Wars pieces mimic antique collector coins and has purposeful distressing like the jewels have traveled across galaxies,” she says. “[I]t is the homage to traditional symbolism that I feel elevates the pieces from mere movie-inspired to treasured talisman.”Marvel and Star Wars are owned by Disney, the parent company of ABC News.Copyright © 2019, ABC Audio. All rights reserved.

As Biden aims to punish Russia on world stage, sanctions hurt at home