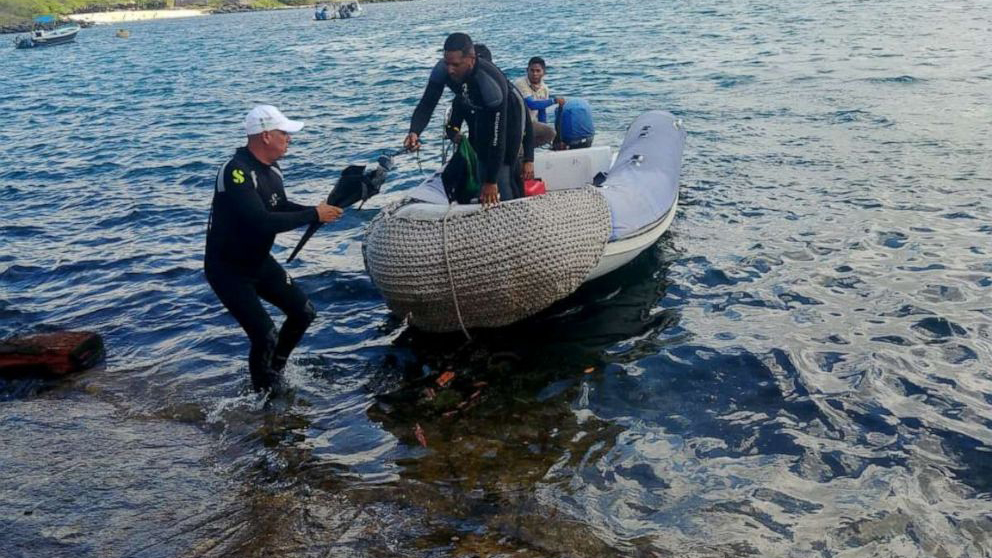 Ministerio del Ambiente de Ecuador/Twitter(NEW YORK) — Areas of the Galapagos Islands were under a state of emergency on Monday as crews battled to assess the damage of a potentially massive oil spill.The spill occurred off San Cristobal Island when a barge carrying 600 gallons of diesel fuel collided with a crane at the La Predial pier on Sunday. The crane was loading a container onto the barge when it suddenly tipped over onto the barge, sinking the vessel.Video from the scene showed crew workers leaping into the eastern Pacific Ocean for safety as the barge capsized, but they couldn’t stop the pristine waters from being flooded with diesel.San Cristobal Island is one of more than a dozen in the Galapagos, which is home to rare wildlife species and one of the world’s most protected natural destinations. The remote islands are roughly 600 miles away from Ecuador, the country that owns them.Park and naval crews were on site Monday, laying out containment barriers and absorbing cloths to contain the spill, but the extent of the damage is unknown.Ecuadorean President Lenín Moreno said he declared the state of emergency when the collision first occurred but said the situation was under control as of early Monday.”Thanks to the timely intervention of several institutions, we have it under control. I am in permanent contact with @normanwray and the COE is activated to watch over the galapagueños,” Moreno said in a tweet translated from Spanish. The COE is Ecuador’s Emergency Operations Committee.It was not immediately clear how much oil had leaked out of the ship and the country’s environmental ministry said it was assessing the risk of pollution.Galapagos’ wildlife was largely spared in 2001, thanks to shifting winds, when a grounded tanker crashed into a reef, pouring 150,000 gallons of fuel into San Cristobal’s waters.At least 14 islands make up the Galapagos National Park, and a remarkable 97% of the land is off-limits to the public. The park is home to over 400 species of fish and an abundance of other unique wildlife, including giant tortoises, the iconic blue-footed boobies and endemic iguanas.In 1835, Charles Darwin’s five-week visit to the islands famously spawned his theory of biological evolution. To date, Darwin’s “On the Origin of Species,” published in 1859, is still considered by many as one of the most influential academic books in science.Authorities have ordered an investigation into the incident.