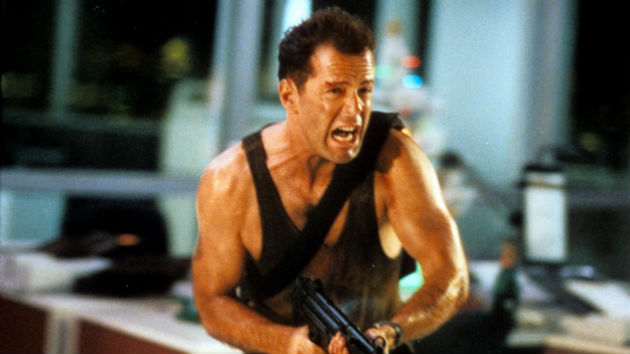 Photo by 20th Century-Fox/Getty Images(NEW YORK) — (NOTE LANGUAGE) “It’s not Christmas until Hans Gruber falls from Nakatomi Plaza.”  That’s a line from a popular meme — and at least one ugly holiday sweater  — which cements the popular opinion that watching Die Hard on Christmas is as festive a tradition as leaving cookies out for Santa.

Of course, 1988’s Die Hard centers on Bruce Willis’ wise-cracking NYPD Detective John McClane, who, on a holiday trip to California to see his estranged wife and visit their kids, ends up fouling up the best-laid plans of Hans Gruber, a (literally) high-flying international criminal played by the late Alan Rickman.

While the movie is historic for shattering the notion that Hollywood action heroes need to be monosyllabic musclemen like Schwarzenegger or a Stallone, debate has raged for years about whether it deserves a spot on your Christmas viewing list next to It’s a Wonderful Life and Elf.

Back in 2017, the movie’s screenwriter, Steven E. De Souza, wrote “#DieHardIsaChristmasMovie,” pointing out that both the Nativity story and Die Hard feature a heavily pregnant woman.

However, the next year, Willis denied it, exclaiming at his Comedy Central Roast: “Die Hard isn’t a Christmas movie. It’s a Godda** Bruce Willis movie!”

20th Century Fox seemed to disagree, releasing a 2018 trailer pitching the movie not only as “A” Christmas story, but “The Greatest Christmas Story.”

To settle this once and for all, The Hollywood Reporter has created a new poll. At of press time, votes were running 89% Yes, to 11% No.

Ramón Rodríguez on playing the “underdog,” working with a “diva” dog in ABC’s ‘Will Trent’