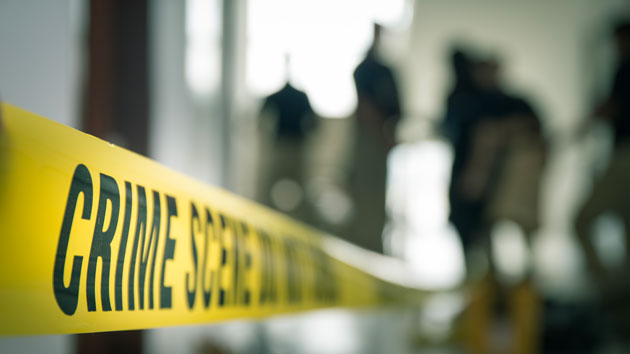 iStock(BALTIMORE) — With only a few days left in the year, Baltimore is 15 homicides away from having the highest rate of slayings the city has ever witnessed in a single year.Two women were shot and killed Sunday night bringing the murder rate to 338 people dead in Baltimore this year. Their deaths came later the same day seven people, including three teenagers, were shot outside a downtown business, the Baltimore Sun reported. Two others were shot and killed in the city on Saturday.The city’s highest number of homicides was in 1993, when 353 people were killed and the city had more than 100,000 additional residents than it does now.Baltimore’s homicide rate is 10 times larger than the United States’ rate, according to the Mises Institute, a nonprofit center of research, teaching and outreach in Alabama.The Baltimore Sun’s homicides data page indicates that the last time the city had less than 300 homicide victims in one year was in 2014. The numbers have since staggered every year.One year after that milestone, the city saw unrest and rioting in April 2015 following the death of Freddie Gray, who suffered injuries while in police custody. Along with the increase in violence this year, the city is still dealing with a federal consent decree that mandates sweeping police reforms after the 2015 unrest and resulting civil rights investigation by the U.S. Justice Department. Copyright © 2019, ABC Radio. All rights reserved.