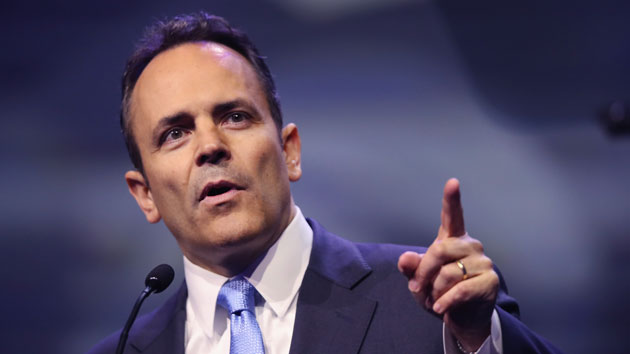 Scott Olson/Getty Images(FRANKFORT, Ky.) — The FBI is looking into hundreds of pardons, some of them highly controversial, made by Kentucky Gov. Matt Bevin before he resigned his post in December, according to reports.The Louisville-Courier Journal said Tuesday State Rep. Chris Harris had shared with reporters that a “criminal investigator” had reached out to him last week, inquiring about the former governor’s pardons that included convicted killers and child rapists.”The impression I got is that there was an investigation ramping up,” Harris reportedly told the Courier-Journal.On Thursday, the now-former Republican governor defended his pardons, which have left victims and some in law enforcement outraged, during a more-than-17-minutes-long radio interview with 840 WHAS.Bevin said he’d made “the most informed” decisions that he could after speaking to legal and law experts as well as advocates.”It’s interesting when we look at our criminal justice system in America. … I don’t care what your ideology — whether you’re liberal or conservative, Republican or Democrat — we should want there to be integrity in the system,” he said.Since losing to Democrat Andy Beshear in November, Bevin made 428 pardons before leaving office, according to The Associated Press. In total, he issued more than 650 pardonsHe said during the radio interview Thursday that of the hundreds of pardons or commutations he’d issued in his four years in office, the number of violent offenders had been in the single digits.”(It was) only a handful of people whose sentences were commuted — and not one of these people is a threat to anybody,” he said. “Most of what you hear people talking about … these people have been out for years.”Bevins, a father of nine, did acknowledge in the interview that he had commuted the sentences of “a couple of people” who had been convicted of child rape.Among the pardons that had raised eyebrows — and fueled calls for an investigation into his pardons — was that of Patrick Baker, who was convicted in 2014 of homicide and other charges for a deadly home invasion.Baker was sentenced to 19 years in prison for shooting a man in front of his wife but had served just two years of his sentence before being pardoned, ABC affiliate WHAS-TV in Louisville said.The Courier-Journal reported that Baker’s family had raised more than $20,000 for Bevin’s campaign. Bevin said he did not know anyone he’d pardoned personally.Bevin maintained that other people who remain in prison, and not Baker, were involved in the slaying in 2014.”Those that are in jail were involved in that murder as was one other individual who is not in jail for that murder and should be. These things will come out,” he said.At a Dec. 17 news conference, Baker maintained that he was not involved in the murder before thanking the former governor for the pardon.”I’d like to thank, Mr. Bevin, for looking into this and all the people behind the scenes that actually dug into this done their own investigation. Hopefully you all maybe can look into that a little bit, too. I am innocent. That’s why I want to thank Mr. Bevin for his courageous actions. And allowing me to come home to my family. It’s been a long journey. It’s been rough, but yeah, I’m glad. And maybe like I said the pardon was never paid for by my family. That’s something you all, I mean common sense can kind of tell you that,” he said, according to WHAS-TV.When asked on Dec. 14, Senate Majority Leader Mitch McConnell said he did not approve of Bevin’s pardons.”It seems to me it was completely inappropriate. I expect he had the power to do it but looking at the examples of people who were incarcerated as a result of heinous crimes,” McConnell said.Kentucky State Sen. Morgan McGarvey said Bevin’s pardons “show what is a shocking lack of judgment and potentially an abuse of our system of justice.”Despite the backlash, Bevin said he would not reconsider any of the pardons he’d issued and invited anyone in the media or law enforcement to investigate the cases in which he’d issued a pardon or commutation.”I’m all for innocent people not being incarcerated. … The facts should matter,” he said. “I wish I would’ve had time to go more carefully through all of these that I didn’t have time to.”Copyright © 2019, ABC Radio. All rights reserved.