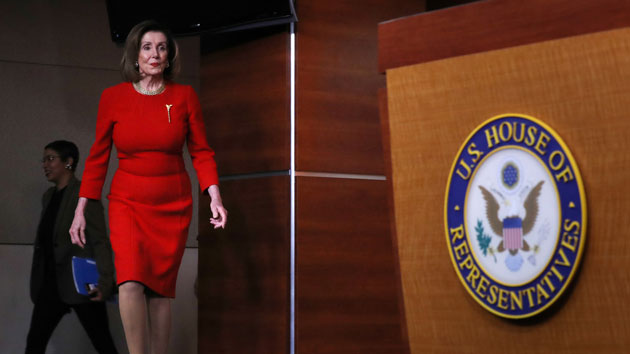 Chip Somodevilla/Getty Images(WEST PALM BEACH, Florida) — President Donald Trump on Tuesday kept up his attacks on House Speaker Nancy Pelosi, saying she hates Republicans and accusing her of acting unreasonably.He criticized Pelosi for not quickly transmitting articles of impeachment to the Senate, telling reporters shortly after holding a Christmas Eve video teleconference call with members of the military, that Pelosi was “doing a tremendous disservice to the country.””She hates the Republican Party,” Trump said from his Mar-a-Lago club in Palm Beach, Florida. “She hates all of the people that voted for me and the Republican Party.”He added, “Some people think that [Pelosi] doesn’t know what she’s doing. A lot of people think that, a lot of people have said it.”Wisconsin Sen. Ron Johnson — who seemingly agreed with Trump — told ABC News on Sunday that he found Pelosi’s decision to withhold the articles “bizarre.””This thing is kind of bizarre.They had to rush to this impeachment vote and then all of a sudden she’s sitting on it,” he said on ABC’s “This Week.” “I don’t think the Senate should be making the case, the House should’ve made in their presentation.”Trump last week became the third president in U.S. history to be impeached, when the House passed two articles of impeachment charging him with abuse of power and obstruction of Congress. House Democrats accused him of co-opting U.S. foreign policy to pressure Ukraine for his own personal, political benefit.Pelosi has yet to transmit the articles to the Senate, which would then hold a trial, saying she wants to ensure the trial would be fair.She reiterated that position in a Dec. 21 letter to her Democratic colleagues. It was released to the public on Tuesday.“This week, the House solemnly honored our oath of office by passing the articles of impeachment,” Pelosi wrote. “It now remains for the Senate to present the rules under which we will proceed.”The next step for Pelosi would be to appoint the trial managers who will represent the Democrats before the Senate — essentially assuming the role of a prosecutor in this instance.”The vote on the Floor was overwhelming and inspiring, and the number of people who want to be mangers is indicative of our strong case,” Pelosi wrote.Senate Minority Leader Chuck Schumer said he and Pelosi were united on their approach to impeachment, after a 40 minute closed-door meeting on Thursday.“What she said was just right,” Schumer said of the speaker’s presser earlier, adding, “We are on the same page.”Senate Majority Leader Mitch McConnell on the other hand has not budged, saying Thursday that he is not an impartial juror. He told senators to be prepared to return for votes on Jan. 6.”The Senate must put this right,” McConnell said. “We must rise to this occasion.”When asked about the impending Senate trial, Trump said Tuesday that Democrats had acted unfairly when they oversaw the impeachment inquiry in the House, and that despite that, “now they want McConnell to do wonderful things for them.”He said McConnell “has the right to do whatever he wants.”But the ball remains in Pelosi’s court, and lawmakers have returned home for the Christmas and New Year’s holidays, with Congress out of session until early next month. Copyright © 2019, ABC Radio. All rights reserved.