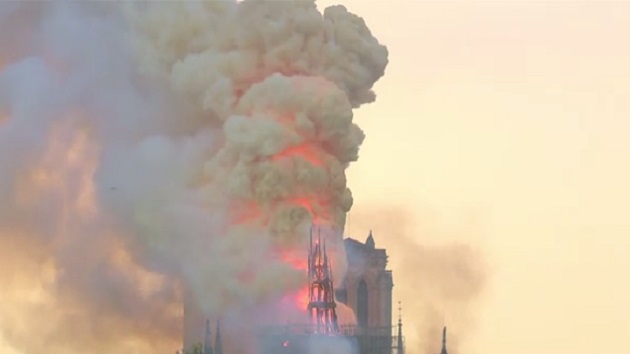 ABC News(PARIS) — For the first time in centuries, Christmas mass was not held at Notre Dame Cathedral.The famed church has been off limits to parishioners since April 15, when a massive inferno brought down its iconic spire and roof.“This is the first time since the French Revolution that there will be no midnight Mass,” Patrick Chauvet, the cathedral rector, told The Associated Press.It was last closed during the holiday after 1789, according to The AP.“We have the opportunity to celebrate the Mass outside the walls, so to speak,” Chauvet added, “but with some indicators that Notre Dame is connected to us.”Mass was instead held at Saint-Germain l’Auxerrois, the Gothic neighboring church, on Wednesday. That’s where Notre Dame has moved its rector, famed statue, liturgy and ordinary services since the blaze.Archbishop Michel Aupetit has held one ceremony inside the cathedral for priests and firefighters, who had to wear hardhats to celebrate Easter in one of the remaining untouched chapels.Investigators determined the cause of the fire appeared to be accidental.All ordinary services have been moved at Saint Germain l’Auxerrois, pending the reconstruction of the 850-year-old cathedral. A giant crane stands outside of the cathedral to help remove scaffolding over the burnt roof.“As long as the scaffolding is there, there is a major risk for the building,” says Remi Fromont, the chief architect for historical monuments, who has worked on Notre Dame since the fire. “If it collapses, we will have significant losses on the cathedral.”A major concern moving forward is the extraction of the remaining pieces of the spire, which had stood since the 19th century, according to Brigitte Kuster, an MP in charge of the mission of information on the reconstruction of the cathedral.The Notre Dame Sacred Music association is also breaking tradition this year and will remain silent during the holidays. It cancelled its Christmas concert to oppose the firing of its teachers, who were let go as a result of the financial loss caused by the fire.In the days and weeks after the inferno, fundraising efforts triggered an unprecedented donation spree for to help with the reconstruction. More than $1 billion in pledges was collected, including $122 million already collected.None of those funds will go to the choir, however, as they are earmarked solely for the reconstruction of the cathedral.“While the safeguarding of the architectural heritage of the Cathedral since the fire of April 15 is the subject of all attention and endowments,” said the collective in its online petition, “the time is also to preserve its immaterial Heritage.”