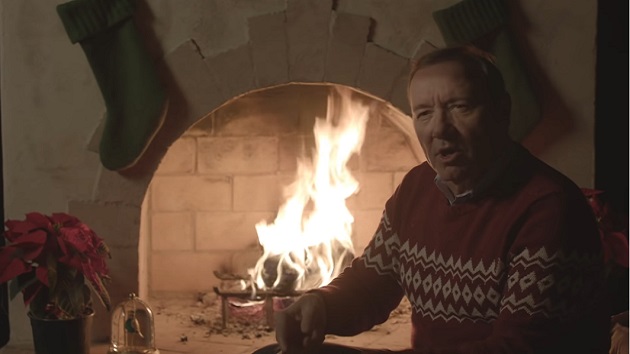 YouTube/Kevin Spacey(LOS ANGELES) — Exactly a year after Kevin Spacey released a bizarre “House of Cards”-themed YouTube video addressing sexual misconduct claims against him, the actor has once again posted a Christmas Eve clip.In the new video, uploaded Tuesday, Spacey sits in front of a roaring fire in a fireplace and, as in last year’s video, adopts the Southern drawl of his former “House of Cards” character, Frank Underwood.”You didn’t really think I was going to miss the opportunity to wish you a Merry Christmas, did you?” he says.Spacey goes on to say that it’s been a “pretty good year” and he “got his health back,” adding that in the new year he wants to “cast my vote for more good in this world,” an apparent reference to the forthcoming elections.”I know what you’re thinking, ‘Can he be serious?’ I’m dead serious,” Spacey continues.”The next time someone does something you don’t like, you can go on the attack,” he says. “But you can also hold your fire and do the unexpected. You can … kill them with kindness.” The video, titled “KTWK” for “kill them with kindness,” ends with ominous music as Spacey stokes the fire.

Spacey was fired from “House of Cards” in 2017 after multiple sexual misconduct and assault allegations were lodged against him. Earlier this year, the sexual assault case against him in Massachusetts was dropped. He is still under investigation in London for several alleged sexual misconduct instances.Copyright © 2019, ABC Radio. All rights reserved.