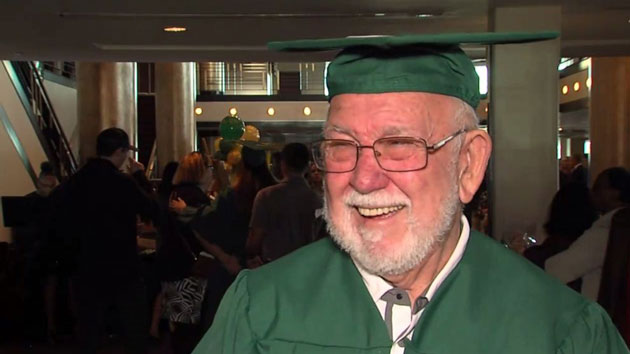 WFTS-TV(TAMPA BAY, Fla.) — An 81-year-old grandfather of eight has finally earned a bachelor’s degree after a longtime promise he kept to his mother.On Dec. 15, Way Bandy graduated from University of South Florida St. Petersburg (USF) in general studies, with his wife Nancy and youngest son Kyle in the audience watching as he walked across the stage.”I truly hope my little story will resonate with someone and they’ll say, “Shoot. If that old guy could do it, I can beat that,"” Bandy told “Good Morning America.” “If that works I’ll be very, very happy about it.”Bandy, a St. Petersburg resident, grew up in Birmingham, Alabama. After high school, he attended Samford University and the University of Alabama, and also spent time at USF.Bandy, who has worked in aerospace most of his life, said he decided to stop going to school so he could get married and start a family.”My mother, bless her heart … the thing she drilled into me as a child was, ‘The two of the most important things are your health and your word of honor. I want your word of honor that one day you’ll go back and get your degree."”This year Bandy decided to fulfill the promise he made to his mom, Dimples Way Bandy, who died in 2003.He gathered his college transcripts and applied to USF. Needing to complete one class to graduate, Bandy returned to USF and chose a biology course studying the wetland environments.Bandy felt it was challenging and almost dropping the class at one point, but he stuck it out — studying hard for the final exam and working tirelessly on his term paper.Bandy said his instructor, Dr. P, gave him a B in the course. She even graded his paper in front of him.”All of a sudden she was giving me hug, we’re doing a high five and a fist bump,” Bandy said of his teacher. “I get in the hallway, I threw up my arms like I did a touchdown and I screamed, ‘Yes! I did it!"”While Bandy said he is “relieved” to be done, he hopes to inspire people to pursue their academic dreams.”Take your time, stay ahead of your goal and promise yourself you’ll finish,” he added. “Whatever motivates you to do it, do it. If I can do it, anybody can — and I promise that from the bottom of my heart.”Copyright © 2019, ABC Audio. All rights reserved.

Idaho college murders: Investigators combing through hundreds of tips a week after murders

Idaho college murders: Other friends were in house when 911 call made, police say