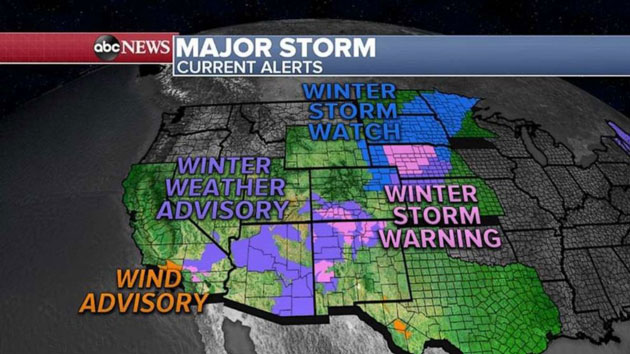 ABC News(NEW YORK) — A major winter storm is moving out of California, but not before dumping as much 3 feet of snow in northern Ventura and Kern counties, and up to 3.46” of rain in Los Angeles County and 3.19″ in San Bernardino County.There were numerous reports of flooding from Los Angeles down to San Diego, where people had to be rescued from the water. Roads and highways were shut down due to snow in the higher elevations in Southern California.An EF-0 tornado was also confirmed in Ventura County Wednesday into Thursday, with some damage reported.Ahead of the storm this morning, 14 states are under snow alerts from California to Minnesota.This morning the storm system is still in the Southwest, bringing heavy rain to Arizona and New Mexico with heavy snow in the mountains.By Saturday, the storm system is expected to move into the center of the country, bringing heavy snow for the Plains and heavy rain in the Great Lakes and Midwest, with severe storms possible further south from Texas to Tennessee.By Sunday afternoon and evening, heavy rain will move into the East, with severe storms possible in Georgia and Alabama.Some of the heavy rain will even reach the Northeast by Sunday night.Most of the snowfall will be found in the Rockies, in the Plains and in the Upper Midwest, where some areas could see over a foot of fresh snow. Copyright © 2019, ABC Audio. All rights reserved.