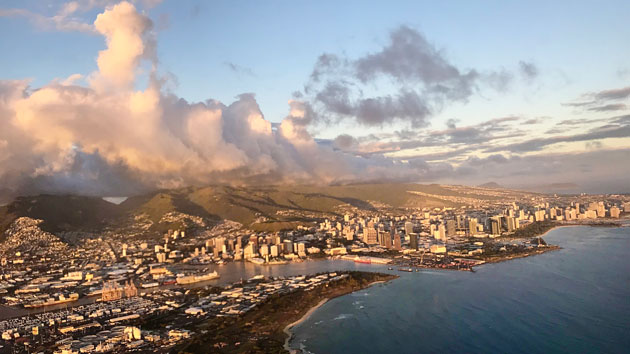 iStock(HONOLULU) — Authorities in Hawaii are searching for a tour helicopter carrying seven people that hasn’t been heard from in more than 12 hours, according to the U.S. Coast Guard.The chopper, which had six passengers, including two children, and the pilot aboard, was off Nā Pali Coast and scheduled to return Thursday at 5:21 p.m., according to the Coast Guard. It did not report back to the base, however.The owner of the helicopter contacted the Joint Rescue Coordination Center in Honolulu, which coordinated crews to search the scene, according to a press released issued early Friday morning by the U.S. Coast Guard’s 14th District Hawaii and the Pacific.The helicopter is equipped with an electronic locator, but officials said that no signals has been received. Nearly 80 percent of Kauai is uninhabited, and much of that is a state park that most helicopter tours include as a point of interest.Officials said weather conditions in the area may factor into the search, but trained crews are on the scene searching for any signs of the helicopter and the seven aboard, said Petty Officer 1st Class Robert Cox, Coast Guard Joint Rescue Command Center Honolulu.There is reportedly 4 miles of visibility in the area because of clouds and rain. Winds are at 28 mph and Friday’s forecast predicts that the winds will diminish slightly with wind waves at 6 feet and scattered rain showers.The company that conducted the tour was not identified by officials.