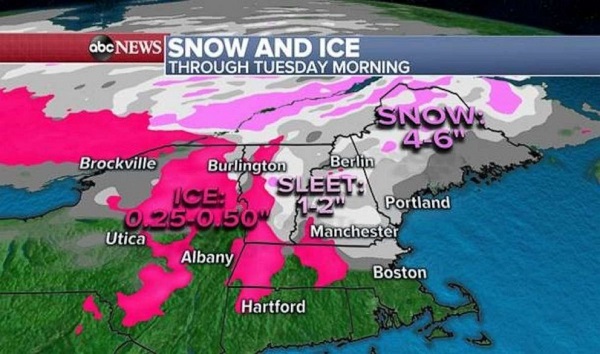 ABC News (NEW YORK) — A major storm is impacting the Central United States with impacts expected in the Northeast starting tonight.There were 10 reports of high wind on Saturday, with gusts recorded at 60 mph in Howell, Missouri. The National Weather Service in Tulsa, Oklahoma, issued a radar-indicated tornado warning on Saturday afternoon for the towns of Broken Arrow, Verdigris and Inola, Oklahoma, with damage reported to at least two homes in Broken Arrow, Oklahoma.Alerts associated with this same storm system remain in place this morning across 22 states from Wyoming to New Hampshire.The low pressure system is tracking east this morning, pushing into the Great Lakes region. Snow continues on the backside across the Northern Plains, with rain and some storms stretching from the Upper Great Lakes south to the Gulf Coast states.By Sunday night, heavy rain and storms will move into the Tennessee River Valley, while rain showers push into the northeastern states including New York City.Meanwhile, along the northern tier of the storm, icy conditions set up for portions of interior New England while some snow continues overnight in parts of the Upper Plains.By Monday morning, conditions deteriorate in parts of New England as a widespread icing event is expected to develop with this system with snow falling further to the north. Snow will continue Monday in the extreme northern Great Lakes.On the south side of the system, rain, heavy at times, will impact areas from the southern Great Lakes to New York City and further south into the Mid-Atlantic states.By Tuesday morning, the low pressure remains over the northern Great Lakes with widespread scattered snow expected, while a secondary surface low develops off of coastal New England sustaining the threat for winter weather in interior New England and heavy rain along the coastal areas, where temperatures will be milder.This system will bring several more inches of snow to portions of the High Plains, Midwest and Great Lakes through Tuesday morning, with the highest snow totals coming in at over 1 foot in portions of North Dakota and Northern Minnesota.For the Northeast, ice will be the primary concern for portions of interior New England with a quarter to a half inch of ice expected through Tuesday morning. The coating of ice coupled with gusty winds in excess of 35 mph may result in power outages.Sleet and snow totals are expected to accumulate several inches by Tuesday morning from Vermont to Maine with the highest totals in Maine of 4-6 inches expected by Tuesday.Meanwhile, another storm — more minor in nature — is expected to impact the West Coast starting this morning and lasting through early Tuesday.Later this morning, widespread rain showers will push onto the coastal areas from Washington state south to California. By later in the day on Sunday. Higher elevations of Norther California and Oregon will see wintry weather.By Monday night, the storm pushes into Southern California where already saturated grounds may lead to flooding with this additional rainfall.A winter storm watch has been issued for the higher elevations of Southern California, where 4-8 inches of snow is expected by Monday afternoon.Coastal rain totals will range from 0.5-1.0 inches of rain, while some localized areas may see above 1 inch of rain. Snow totals will generally be around 3-6 inches with some localized areas in the Santa Barbara Mountains may see up to 8 inches.Meanwhile in the Mid-Atlantic, milder temperatures and conditions are expected by New Year’s Eve and into New Year’s Day. Localized snow totals of 8-12” or more are expected for parts of interior New England by News Year’s Eve. Copyright © 2019, ABC Radio. All rights reserved.