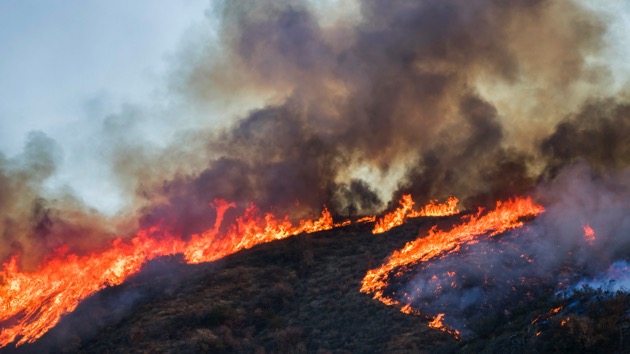 Erin Donalson/iStock(VICTORIA, Australia) — A heatwave bringing scorching temperatures exceeding 104 degrees Fahrenheit and extreme winds are fueling the already deadly bushfires racing across large swathes of the Australian state of New South Wales. The dangerous fires are now spreading in the neighboring state of Victoria, affecting tens of thousands of people.Roughly 30,000 residents and tourists were ordered to evacuate the popular holiday region of East Gippsland, Victoria, on Sunday but evacuations were later canceled Monday when it became too dangerous as the fires moved toward the major roads.There were 97 fires burning across New South Wales Monday, the region most affected by the bushfires this year. Forth-three of those fires are not yet contained.A volunteer firefighter in NSW was the latest casualty when a truck he was riding in crashed and rolled over in the high winds. Two others in the vehicle suffered burns.The death toll now stands at 10 since September, when the fire season began.As New Year’s celebrations approach, more than 250,000 people have signed a petition calling for Sydney’s famed harbor New Year’s fireworks display to be canceled and for the money to be spent fighting the fires.Australian Prime Minister Scott Morrison, however, said that the fireworks display would go ahead to as display of the country’s resilience.The fires have been devastating for the countries wildlife.Ecologists at the University of Sydney estimate that around 480 million animals have been killed in the bushfires, including 8,000 koalas.Environment minister Sussan Ley told the Australian Broadcasting Corporation that up to 30 percent of the koala population in the New South Wales mid-north coast might have been killed.The region, which lies 240 miles north of Sydney, is known for its koala population, home to the largest numbers in Australia.Earlier this month, Mark Graham, an ecologist with the Nature Conservation Council, told an NSW parliamentary inquiry that koalas “have no capacity to move fast enough to get away” from fires that spread from treetop to treetop. Graham continued to say the fires have decimated such extensive areas of koala habitat that he believes that Australia will begin to see declines in the population of their iconic animal going forward.Copyright © 2019, ABC Audio. All rights reserved.

Ngozi Fulani speaks out on racism she faced at Buckingham Palace