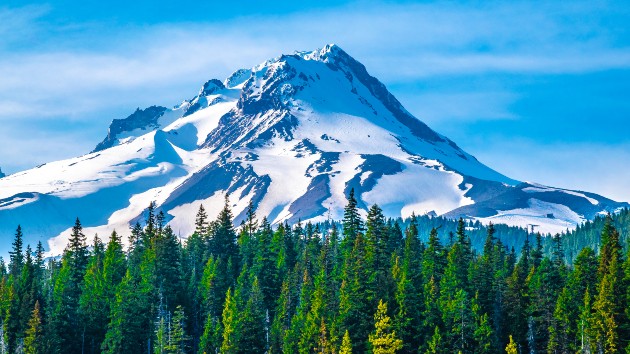 Jeremy Janus/iStock(PORTLAND, Ore.) — A 16-year-old rock climber survived a 500-foot fall on Oregon’s Mount Hood Monday morning, officials say. The climber, who officials say is in stable condition, was rescued by members of the Clackamas County Sheriff’s Search and Rescue team, assisted by volunteers from several area mountain rescue groups.The fall occurred at around 9 a.m. as the climber and his group were making an icy ascent toward the mountain’s summit, in an area known as the Pearly Gates. He fell an estimated 500 feet into a valley known as Devil’s Kitchen, officials said.At an elevation of about 10,000 feet, it took rescuers about four hours to reach him and another three hours to evacuate him off the mountain on a rescue sled. “It’s a technical mountain — it’s not a Sunday stroll, it’s inherently dangerous,” Lt. Brian Jensen of the Clackamas County Sheriff’s Office told Portland ABC affiliate KATU-TV. “Going up there, you need to have the proper skill set and the proper equipment to do so safely. And doing so with anything less than that can be dangerous.”The climber sustained a leg injury in the fall and is expected to recover, officials said. Mount Hood, the 11th highest peak in the contiguous United States, draws around 10,000 rock and ice climbers each year, making it one of the world’s most popular glacier mountains for climbing. Copyright © 2019, ABC Audio. All rights reserved.