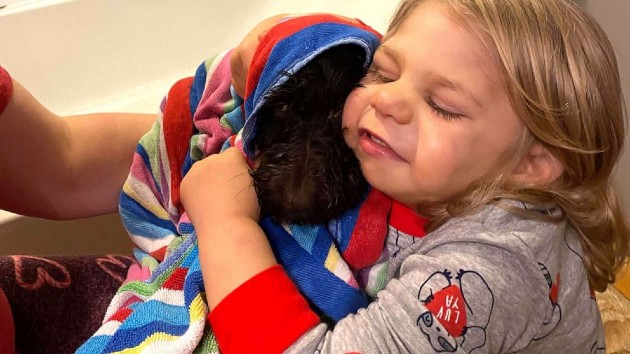 Courtesy Danielle Palmer(NEW YORK) — A toddler who was sad to leave a hospital therapy dog after receiving heart transplant has been gifted a pup of his very own. Truett Palmer was born with a congenital heart defect called truncus arteriosus — a rare disease in which a single common blood vessel comes out of the heart, instead of the normal two vessels, according to the Centers for Disease Control and Prevention. Truett was also born with MFDM — a genetic disorder that causes abnormalities of the head and face — and has had multiple surgeries throughout his life, including open heart surgery in June, his mom Danielle Palmer told ABC News’ Good Morning America.”At Boston Children’s they did his open heart surgery to hopefully repair, make things better and give him a better quality of life,” said Palmer, a mother of three from Owensville, Missouri. “There were complications with the surgery and he had severe heart failure. That’s what put him on heart transplant list.” “He was gifted his heart on Oct. 30,” she said.Truett spent 10 weeks at Boston Children’s Hospital, where he bonded with Zuri, a female goldendoodle therapy dog who would visit the 2-year-old on a weekly basis.Truett was transferred to St. Louis Children’s Hospital where he spent another 12 weeks, then returned home on Nov. 22. Knowing he loved Zuri so much, Truett’s parents wanted to get him a goldendoodle of his own. That’s when they came across a Facebook post by Kentucky resident Gena Gray.Gray’s female goldendoodle had welcomed puppies, and Gray was looking to give them homes. “I don’t have children but I love children, so when I had this puppy, instead of getting money I just felt felt like I wanted to help someone because these dogs have been such a blessing to me,” Gray told GMA.Gray, a nursing student, advertised a puppy needing a good home, and mentioned she was looking for a family who had a child with special needs. She received over 100 responses — including a message from Palmer. “She told me her son had [heart surgery],” Gray recalled. “I really felt like, ‘This is it,’ so I messaged her.”Since Gray lives nearly 9 hours from the Palmers, Truett’s grandfather, Rick McCord, a crop duster who works with small airplanes, took the trip with dad Brett Palmer to pick up Truett’s goldendoodle.”One of them wanted to be able to hug me,” Gray said of Truett’s parents. “They’re just super nice people.”Palmer said she’s extremely grateful for Gray’s kind act.”I’m humbled that she would even consider giving us such an amazing puppy,” Palmer said. “For her to sacrifice that for our family because of what my child has gone through … it’s overwhelming.” Truett named his goldendoodle Zeda Grace, and the puppy follows him wherever he goes.Truett’s donor heart came from a 3-year-old. Palmer said she hopes to one day meet the child’s family to thank them in person. The Palmers hope Truett’s story raises awareness on the importance of organ donation.Copyright © 2019, ABC Audio. All rights reserved.

Physician weighs in on how patients, doctors can improve their trust