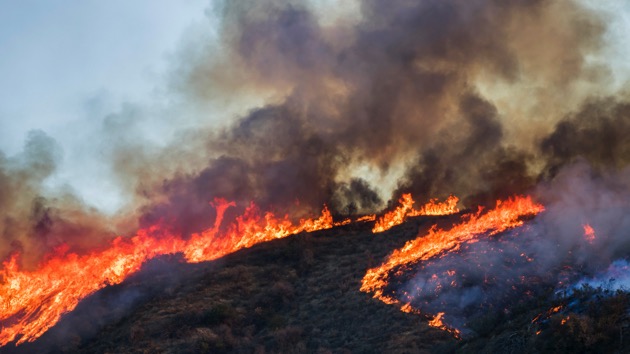 Erin Donalson/iStock(LONDON) — The Fire and Rescue team from New South Wales survived an astonishing drive through a bush fire, as the country reissued emergency warnings heading into the New Year.In astonishing footage captured by the besieged crew members, their vehicle can be seen driving through a forest entirely ablaze as they sought to battle the record-breaking bush fires sweeping the Australian state.“The crew from Fire and Rescue NSW Station 509 Wyoming recorded this video showing the moment their truck was overrun by the bushfire burning South of Nowra,” Fire and Rescue New South Wales posted on Twitter. “The crew was forced to shelter in their truck as the fire front passed through.”

The crew from Fire and Rescue NSW Station 509 Wyoming recorded this video showing the moment their truck was overrun by the bushfire burning South of Nowra. The crew was forced to shelter in their truck as the fire front passed through. #NSWFires #ProtectTheIrreplaceable pic.twitter.com/Hb0yVrefi9

In response to one social media user’s query if the crew members are safe, the Fire and Rescue service tweeted: “Yes, the crew are ok.”The astonishing video was released as the authorities struggle to cope with wildfires burning through the Australia in recent weeks.Wildfires have also raged across Queensland, Victoria, Western Australia and Southern Australia, although the worst of the fires have been seen in New South Wales. There were 97 fires burning across New South Wales as of Monday.Ecologists at the University of Sydney estimate that around 480 million animals have been killed in the bush fires, including 8,000 koalas. So far, 12 people have been confirmed dead during the crisis, while four are still missing.Over 4,000 Australians were forced to take refuge by the beach in the town of Mallacoota New Year’s Eve, as the wildfires cut off crucial road access to prevent them from escaping.Emergency warnings remain in place for much of the country heading into the New Year.

Despite the devastating wildfires, New Year’s Eve celebrations went ahead in Sydney, although over 200,000 people signed a petition to stop the event taking place. Huge clouds of smoke have been seen over Sydney in recent weeks with the national average temperature reaching the hottest on record — a scorching 107.4 degrees Fahrenheit — earlier in December. Copyright © 2019, ABC Audio. All rights reserved.