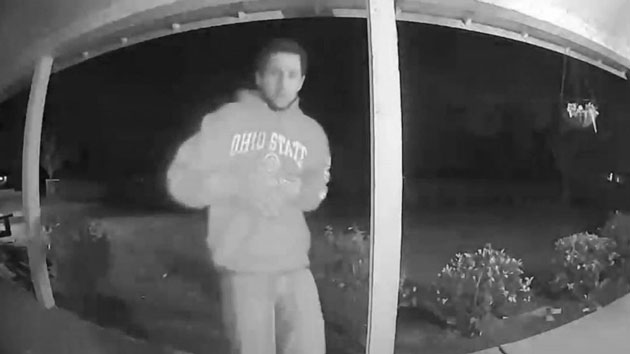 ABC News(PHOENIX) — A football fan was visiting Phoenix for the Fiesta Bowl when he ended up carjacked, kidnapped and shot, authorities said, in a terrifying ordeal later captured on doorbell camera when he begged for help.The attack unfolded early Sunday morning, after the victim had an argument with his girlfriend and went to sleep in his car in an apartment complex parking lot, according to court documents.A man wearing a ski mask knocked on the window and told the victim he was parked in his assigned parking space, the documents said. When the victim partially rolled down his car window, the masked man pointed a pistol at his head and ordered him to get out of the car, documents said.That’s when two other men wearing masks got into the car, documents said, and they drove the football fan to an ATM and forced him to take out money.After the ATM withdrawal, the suspects drove the victim to a location in Peoria and ordered him to get out of his car and walk away backwards, and he did as he was told, court documents said.The victim then saw one of the suspects “point a pistol at him, and he turned around and ran,” documents stated.He heard about six to eight gunshots and felt one round hit him in the lower back, according to the documents.While injured, he kept running until he reached a home and got a resident to call 911, documents said. He’s seen pleading for help on doorbell camera footage.He was hospitalized and underwent surgery, court documents said.Meanwhile, police traced the victim’s phone, zeroing in on his stolen car, court documents said.Authorities found three people in the stolen car, and when police moved in, the suspects sped away, fleeing to one of the suspect’s homes, according to court documents. They were taken into custody soon after.Two of the three suspects are juveniles — ages 16 and 17 — and were arrested on charges including kidnapping and armed robbery, according to the Maricopa County Sheriff’s Office. The third suspect, Roderick Smith, 18, was arrested on charges including kidnapping, armed robbery and aggravated assault with a deadly weapon, according to court documents.In an interview with police, Smith said he was in the driver’s seat looking straight ahead when he heard several gunshots, court documents said.Smith is due in court Jan. 6 for a status conference and Jan. 9 for a preliminary hearing.”At this time, there is no link between the Fiesta Bowl and this incident,” said a spokesperson with the sheriff’s office.