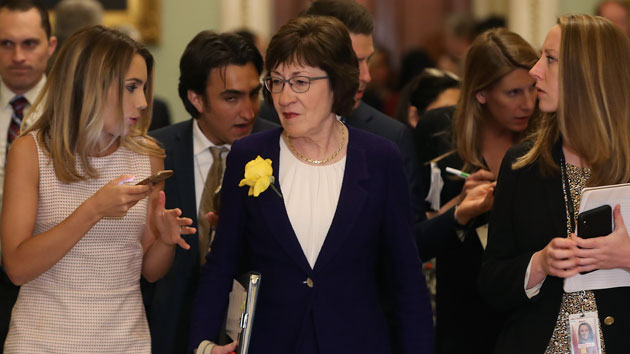 Mark Wilson/Getty Images(WASHINGTON) — In a potential break from Republican leadership, Maine Sen. Susan Collins said on Tuesday she’s “open to witnesses” in the upcoming impeachment trial of President Donald Trump, including top administration officials such as acting White House Chief of Staff Mick Mulvaney.Senate Majority Leader Mitch McConnell, Sen. Lindsey Graham and other key Republicans have said they favor a shorter trial with no witnesses.”I am open to witnesses,” Collins said in an interview with Maine Public Radio when asked whether Mulvaney, former National Security Adviser John Bolton and others with first-hand knowledge of the Ukraine affair should testify.But she qualified her comment to come closer to McConnell’s view that decisions about witnesses should wait until after the trial is underway.”I think it’s premature to decide who should be called until we see the evidence that is presented and get the answers to the questions that we senators can submit through the Chief Justice to both sides,” she said.At the same time, when asked about McConnell saying he would be in lockstep with the White House, she said senators from both parties have acted inappropriately in how they’ve approached a Senate trial.”It is inappropriate, in my judgment, for senators on either side of the aisle to prejudge the evidence before they have heard what is presented to us, because the each of us will take an oath, an oath that I take very seriously to render impartial justice,” Collins said in the interview.”There are senators on both sides of the aisle, who, to me, are not giving the appearance of and the reality of judging that’s in an impartial way,” she said.Collins, who announced Tuesday that she would officially seek reelection in Maine, also weighed in on comments by a fellow moderate Republican — and another possible impeachment swing vote — Alaska Sen. Lisa Murkowski. She said last week that she was “disturbed” to hear McConnell say he would work in “total coordination” with the president’s defense team.In the interview, Collins hearkened back to how she and other senators approached the Clinton impeachment trial in 1999, in which Republican Sen. Trent Lott and Democratic Sen. Tom Daschle reached a consensus on trial rules then adopted unanimously by the Senate.A civil agreement of that type is unlikely this time around, Collins said, although she has recommend McConnell take similar approach to the Clinton trial.Collins’ remarks come on the heels of reporting by the New York Times that Secretary of State Mike Pompeo, Secretary of Defense Mark Esper and Mulvaney held an intervention-style meeting in the Oval Office in July in which they pleaded with Trump to release the military aid to Ukraine.Senate Minority Leader Chuck Schumer has said “these new revelations are a game-changer” and further make the case for the witnesses Democrats have requested to testify.”This news story shows all four witnesses that we Senate Democrats have requested — Mick Mulvaney, John Bolton, Michael Duffy, and Robert Blair were intimately involved and had direct knowledge of President Trump’s decision to cut off aid in order to benefit himself,” Schumer said Monday evening, then asked rhetorically. “Will the Senate hold a fair trial or will it enable a cover-up?”Sen. Doug Jones, D-Ala., who narrowly defeated the GOP candidate, Judge Roy Moore, in a special election last year, shared Schumer’s sentiment, questioning whether a majority of his fellow senators will “pursue the truth” in a Washington Post op-ed published Monday.Despite the vulnerability of his red state seat, Jones also called on the aforementioned four key witnesses to testify.”I do not know what their answers would be, but I want to hear from them, and so should every senator and every American. We cannot allow the full truth to evade this trial only to be revealed in some future memoir or committee hearing,” Jones said. “These questions need to be answered now, not later in Bolton’s upcoming book.”In a tweet on New Year’s Eve from his Mar-a-Lago resort, President Trump claimed Democrats are trying to avoid a Senate trial in order to keep former Vice President Joe Biden from having to testify as a witness.”The Democrats will do anything to avoid a trial in the Senate in order to protect Sleepy Joe Biden, and expose the millions and millions of dollars that “Where’s” Hunter, & possibly Joe, were paid by companies and countries for doing NOTHING. Joe wants no part of this mess!,” Trump tweeted Tuesday morning.Biden himself has been unclear in his position on whether he would comply with a congressional subpoena, at first signaling he might not arguing there was no legitimate basis for one, but then Monday implying that he would comply.”I will not contribute to the notion that there’s any legitimacy to the notion of calling me as a witness, Biden said during an editorial board meeting with Seacoast Media Group. “If in fact I got a subpoena, we’d deal with it then.” Copyright © 2019, ABC Audio. All rights reserved.