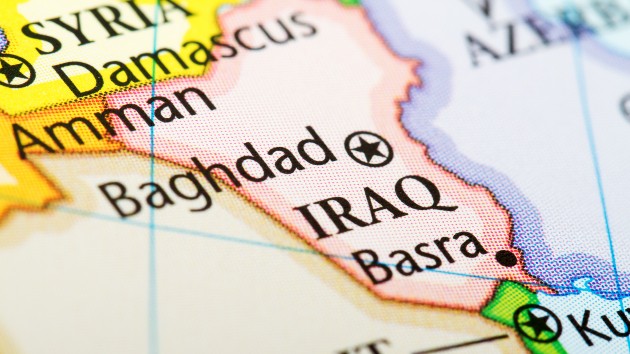 CT757fan/iStock(BAGHDAD) — Hundreds of protesters, fomented by pro-Iranian militias and seemingly permitted by Iraqi security forces, have attempted to storm the U.S. embassy in Baghdad to protest recent deadly U.S. airstrikes against an Iranian-backed militia.The violent scene on Tuesday marked another escalation in tensions between the U.S. and Iran, with President Donald Trump blaming Iran for “orchestrating” the “attack” and calling on Iraqi officials — caught between their two allies — to defend U.S. personnel and property.U.S. officials, concerned about a breach of the compound, were drawing up plans for an evacuation if needed, according to a former senior administration official. A State Department spokesperson later told ABC News they do not intend to evacuate personnel now, all of whom are “secure.”A number of Marines arrived from Kuwait at the Baghdad embassy to bolster security, according to two U.S. officials, one of whom said it was about 100 Marines. Two Apache helicopters conducted a show of force over the embassy, firing flares as a warning to protesters, another official said.Outside the compound, hundreds of protesters smashed security cameras and chanted “Down, down USA.”Photos from the scene showed a compound sentry box had been set on fire, and footage showed the crowd waving yellow militia flags and chanting.The embassy itself, however, was never breached, according to the State Department spokesperson.The protests came after mourners held funerals for fighters from the pro-Iranian militia Kata’ib Hezbollah who were killed in U.S. airstrikes Sunday — a response to an attack on U.S. forces last Friday in Kirkuk, Iraq, that killed one civilian contractor.Protesters then marched through the Green Zone until they reached the U.S. embassy, reportedly allowed to pass by Iraqi security forces into the otherwise heavily fortified section of Baghdad. Iraqi security forces eventually arrived on the scene to push protesters back after U.S. forces used non-lethal means to repel an attack, according to a law enforcement source.The Iraqi government has been caught in the cross-hairs of high tension between the U.S. and Iran — with analysts saying Prime Minister Adil Abdul-Mahdi appeared to be trying to let anger from the U.S. strikes dissipate by letting protests happen, without angering U.S. officials and endangering American lives.”This is all about Iraqi domestic politics. After the U.S. retaliation, the Iraqi government had to let anger by local members of Katai’b Hezbollah play out publicly, appeasing both a key element of their political base and Tehran,” said ret. Col. Steve Ganyard, former Deputy Assistant Secretary of State and now an ABC News contributor.But U.S. officials, including Trump himself, demanded Iraqi forces protect U.S. personnel.”Iran killed an American contractor, wounding many. We strongly responded, and always will. Now Iran is orchestrating an attack on the U.S. Embassy in Iraq. They will be held fully responsible. In addition, we expect Iraq to use its forces to protect the Embassy, and so notified!” Trump said on Twitter after the protests began.A former senior administration official told ABC News that Ambassador Matthew Tueller is out of the country and on leave for the holidays after false reports that he and embassy staff had been evacuated. The State Department spokesperson later confirmed Tueller was not there and said he will return to the embassy.At this point, the embassy remains on lockdown. Officials in Washington continue to closely monitor the situation.Secretary of State Mike Pompeo “made clear the United States will protect and defend its people” in separate phone calls with the Iraqi Minister Adil Abdul-Mahdi and President Barham Salih on Tuesday.”Both Abdul-Mahdi and Salih assured the Secretary that they took seriously their responsibility for and would guarantee the safety and security of U.S. personnel and property,” State Department spokesperson Morgan Ortagus said.For months now, Iraq has been swept by a wave of anti-government protests, rallying against corruption and, often, Iranian influence. Iraqi security forces have violently cracked down on those demonstrations, blocking them from entering the Green Zone, where Iraq’s central government and several foreign embassies, including the U.S., are housed.But these pro-Iranian protesters made it through the Green Zone to the U.S. embassy Tuesday, infuriating some U.S. officials. Unlike the anti-government protests, the crowds on Tuesday have been a mix of real and Iranian-backed protesters, the former official said, angry at U.S. strikes on Kata’ib Hezbollah (KH).”The Iranian backed demonstrations in front of the U.S. Embassy should not be confused with the Iraqi protesters who have been in the streets since October to decry the corruption exported to Iraq by the Iranian regime,” the State Department spokesperson added.The attack on the embassy follows those American airstrikes on the group in Iraq and Syria over the weekend. Strikes were conducted against five facilities affiliated with KH, which the Pentagon described as a group linked to Iran’s Quds Force and blamed for recent attacks in Iraq including the rocket attack that killed a U.S. civilian contractor at the K1 Iraqi military base near Kirkuk on Friday.In the aftermath of those strikes, a top Iraqi militia chief warned of a strong response against the U.S.A senior State Department official downplayed the threat of retaliation from Iran or Iran-backed proxies Monday, saying, “We don’t have any fears.”The Iraqi authorities have a duty to protect the embassy from any attempted seizure by the protesters, Mick Mulroy, a former United States deputy assistant secretary of defense in charge of Mideast policy, told ABC News.”If given the authority to repel an assault, there is no doubt the security forces at the embassy would be able to do so,” according to Mulroy, now an ABC News National Security and Defense Analyst. “However, the authority to engage civilians, especially if they are unarmed, even if they are breaching the perimeter is the issue. That is the issue in all embassy protests, and it is why Iran may try and use civilians and a protest as cover for an attempt to seize the embassy. The Iraqi government has an absolute obligation to prevent this from happening.”