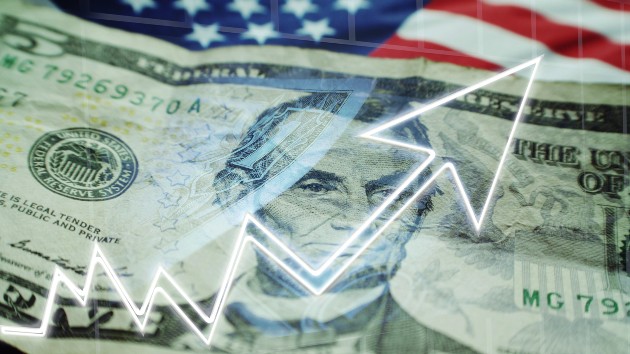 Darren415/iStock(NEW YORK) — The minimum wage in more than 20 states and 26 cities and counties across the United States will increase starting on Jan. 1, affecting more than half of the country’s population and marking the greatest jurisdictional raise in U.S. history. “Next year’s increase is … going to be seen as the highest number of minimum wage increases of any time,” Yannet Lathrop, a researcher at the National Employment Law Project (NELP), told ABC News. Of the states and municipalities increasing their minimum wage, 17 will hit or surpass $15 an hour. Later next year, four more states and 23 more municipalities will raise their wage floors as well, according to NELP.Those living and working in the state of Illinois and the city of Saint Paul, Minnesota, will see their salaries increase twice in the new year. Among the cities that have agreed to raise the minimum wage to $15 per hour are Seattle, Petaluma, California, and New York City. Seattle and Petaluma will maintain lower wage floors for smaller businesses, while New York City will require all businesses to pay workers $15 per hour.While many state and local governments will raise their minimum wages in 2020, there are no public plans for a federal increase.Congress set the federal minimum at $7.25 per hour in 2009. While many states have passed higher wage floors, the federal rate has remained the same for the past 10 years, the longest period of time without an increase since the Roosevelt administration implemented it in 1938. Lathrop said “federal inaction” is a significant reason why so many states and municipalities are raising minimum wages. “There is a bill in Congress for a $15 minimum wage by 2025, I believe,” she said. “And it passed the House, but it’s stalled in the Senate and is not being brought up to the floor by the Senate leadership or the (Health, Education, Labor, and Pensions) committee chair.” Lathrop also said a rising cost of living across the country has prompted the need for consistent wage increases. “States and localities understand that costs of living are rising and minimum wages need to keep up with that,” she told ABC News.Record-low unemployment has motivated some corporations to raise their own thresholds. For example, in 2018, Amazon increased their rate to $15 an hour. In May, Target hiked their minimum wage to $13. And Vermont-based Ben & Jerry’s said it recalculates its rate each year to make sure it keeps up with the state’s cost of living. Throughout the last several years, the labor-financed “Fight for $15” has organized strikes and demonstrations across the country pushing for increased wages for workers. “The Fight for 15 has been really key in driving a lot of these wages,” Lathrop said. “Obviously, the organizing of workers is part of it, but also just the capturing of public imagination and getting the public to also see that minimum wage increases are really needed.”However, opponents of increasing the minimum wage have argued these raises could hurt workers and businesses alike. “There are communities where high wages are fairly normal and this is not likely to have a huge impact. And there are communities where this represents a significant increase in the cost of doing business,” Michael Tanner, a senior fellow at the Cato Institute, told ABC News. “That’s going to have a negative impact.” He said increasing minimum wage benefits the “low-skilled” at the expense of the “even less skilled.” “Essentially what it does, is it moves some people up the ladder … but it does prevent people at the bottom end of the scale from getting a job in the first place,” Tanner said. He explained that some businesses would not be able to pay new employees the increased minimum wage.Jeffrey Clemens, associate professor of economics at the University of California, San Diego, told ABC News that businesses could transfer some of the increases in costs to consumers by raising prices. “Other responses would include perhaps looking for slightly higher-skilled workers just to make sure that the kind of the output that each worker is delivering remains in line with what it costs the employer to hire them,” Clemens said. “Some firms, like a McDonald’s or other sort of food service or retail outlets, might start substituting things like automated kiosk machines.”The nonpartisan Congressional Budget Office released a report in July arguing that increasing the minimum wage to $15 an hour would benefit 27 million people, but also cost 1.3 million people their jobs. Lathrop said she finds these arguments unconvincing. “We have not really seen unemployment go up the way that opponents of minimum wage increases suggest,” she said, adding that New York City wages have doubled between 2012 and 2019. She continued, “So those wages doubled and we did not see businesses closing. We did not see an effect really on jobs or hours. But we did see an increase in the earnings earned by workers.”But Clemens said that it is important to take into account the broader labor market context in which these increases take place. In the U.S.’s current economic expansion, “the outcome of moderate-sized minimum wage increases would be to maybe cause a little bit less hiring, but certainly no firing of existing workers,” he said. If the U.S. were to enter into a recession, as several economists have predicted is coming, Clemens says the effect of minimum wage increases could be more severe. Copyright © 2019, ABC Audio. All rights reserved.