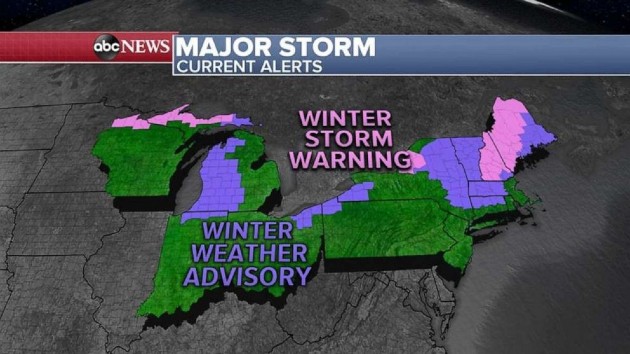 ABC News(NEW YORK) — The major storm that moved across the country from Christmas to Tuesday is now finally moving out, leaving behind gusty winds and snow showers from the Great Lakes to the Northeast. The highest snowfall total east of the Rockies from this storm was in North Dakota, where 26 inches of snow fell. Up to 14 inches fell in Michigan and up to 11” fell in Maine.Major ice accumulation was also reported, with the highest in northern New York state, where in Massena up to 1 inch of ice accumulated on everything. Other ice accumulations: Goshen, Massachusetts, had up to 0.75 inches, Norfolk, Connecticut, had 0.3 inches and Pennsylvania had 0.5 inches. The storm brought very strong winds to the Midwest and the Northeast, as some of the gusts included 71 mph in Sandusky, Ohio, 56 mph in Suffolk County, New York, 54 mph in Greenwich, Connecticut, and 44 mph in Queens, New York. Also, heavy rain fell in the Northeast causing flash flooding on the roads, from New York City to Boston, where some areas got more than 2 inches of rain.As the storm departs Tuesday, 11 states are still on alert for wintry weather from Wisconsin to Maine, mostly for additional snowfall. On Tuesday morning there are two areas of low pressure: one over the Great Lakes bringing snow from Wisconsin and Michigan, and one in New England with snow from northern New York to Maine. The heaviest snow Tuesday will be in Michigan and northern New England, where half a foot of snow is possible. By Tuesday night, just in time to ring in the new year, most of the snow will be gone from the Northeast and the Midwest with just a few snow showers left, but it will be windy with wind gusts of 25 to 35 mph.As the eastern storm departs, we ring in the new year with a new storm on the West Coast, with heavy rain from Seattle to Portland, Oregon, and down to Northern California. In the mountains, heavy snow is expected, especially in the Rockies. Winter storm watches have been issued from Washington to Colorado, with some areas getting up to two feet by Wednesday evening.On Wednesday, this new western storm will cross the Rockies and will redevelop by Thursday in Texas and the western Gulf Coast states, with heavy rain and severe storms possible across the South. This storm will move into the Northeast by the end of the week with more heavy rain and gusty winds.