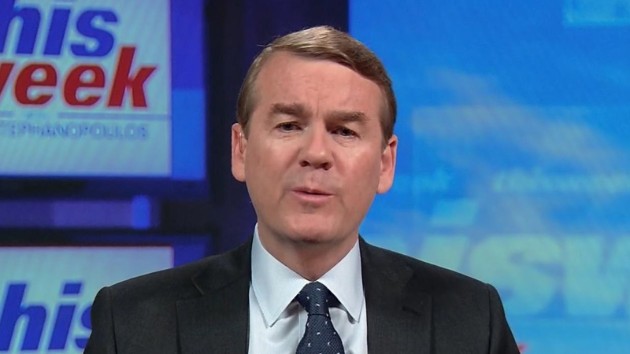 ABC News(MANCHESTER, N.H.) — Revelers in a house in Manchester, New Hampshire, counted down the final seconds of 2019 and cheered “Happy New Year” — then, after a kiss with his wife, Sen. Michael Bennet began the first political event of 2020. Moments before speaking to the crowd, the Democratic presidential candidate told ABC News that his “New Year’s resolution is to come in the top three in New Hampshire and to do everything I can to beat Donald Trump and flip the Senate this year.””A big part of that strategy is to do town hall after town hall and answer every question, like John McCain and others had done,” Bennet said. His campaign announced in early December that he would hold 50 town halls before Feb. 11, the date of the New Hampshire primary. This event, he told the crowd, was his 25th town hall since making that pledge. And his first of 2020.Bennet added that he’s been gaining endorsements as a result of doing so many town halls because his message is spreading, which is adding momentum to his campaign. He said that because of this, “I really think there’s a real possibility that we could end up in the top three” on primary night.The momentum, however, could stall while Bennet is off the trail to sit in a Senate impeachment trial. Bennet told ABC News he’s “not worried” about losing momentum because sitting in a Senate trial is “out of my control.” “We’re going to keep doing this work,” he said. “We’re going to continue to be here. I obviously have to fulfill my constitutional responsibility, and I will.”Bennet also acknowledged that while he sees momentum in his campaign, he’s not registering very high in the polls; in the most recent Quinnipiac poll released on Nov. 11, he got just 1% of support among likely New Hampshire Democratic primary voters. After acknowledging his position in the polls, Bennet told the crowd that “this is a new year,” and vowed to continue campaigning. Copyright © 2020, ABC Audio. All rights reserved.