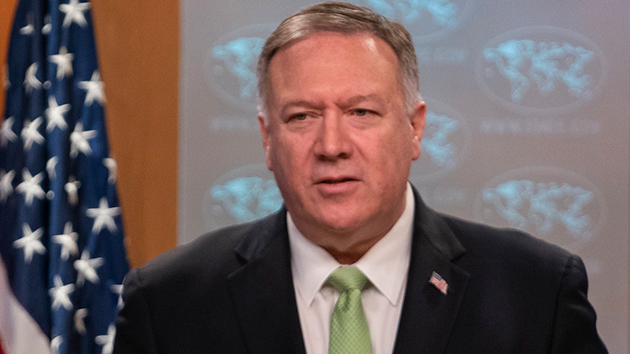 State Department photo by Freddie Everett(WASHINGTON) — Less than 24 hours before Secretary of State Mike Pompeo was scheduled to depart for his first visit to Ukraine in his official capacity, the trip was cancelled because of the protests at the U.S. Embassy in Baghdad, according to the State Department.”Pompeo must postpone his visit to Ukraine, Belarus, Kazakhstan, Uzbekistan, and Cyprus due to the need for the Secretary to be in Washington, D.C., to continue monitoring the ongoing situation in Iraq and ensure the safety and security of Americans in the Middle East,” State Department spokesperson Morgan Ortagus said in a statement on Wednesday.The cancellation comes one day after Iran-backed militias and their supporters stormed the American embassy and then camped outside the compound overnight.Protesters dispersed on Wednesday, but the U.S. embassy has suspended all public consulate operations until further notice and advised U.S. citizens to avoid the area.During Tuesday’s protests, marchers pushed their way past an outer wall right up to the embassy gates, but a State Department spokesperson said that the embassy itself was never breached. U.S. Marines were sent to the embassy from Kuwait and soldiers with the 82nd Airborne Division were deployed to the Middle East “immediately,” Defense Secretary Mark Esper said in a statement Tuesday night.The assault on the compound grew out of anger over U.S. airstrikes against an Iranian-backed militia Sunday.Copyright © 2020, ABC Audio. All rights reserved.