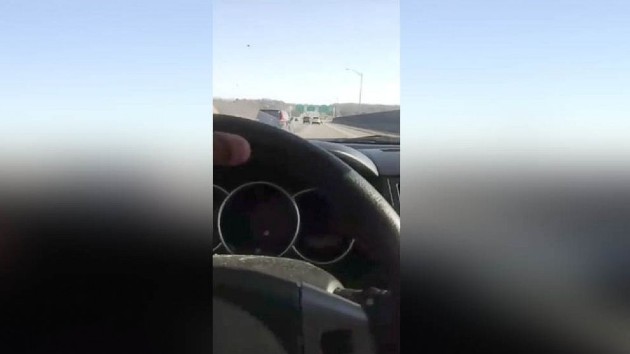 Connecticut State Police(NEW YORK) — A person who was driving at over 100 mph ended up broadcasting the moment he crashed his vehicle in Connecticut, police say. A video posted on Facebook by Connecticut State Police shows a driver’s view of a highway as the vehicle weaves in and out of traffic at high speeds. The driver points the camera at the car’s speedometer, which can be seen to register over 100 mph. As the vehicle exits on a highway ramp, the car is seen to spin and its tires can be heard screeching. The driver then drops the camera and the car rolls over as it crashes.The driver, Kenneth Hofler, 23, of Middletown, Connecticut, was driving over the Gold Star Memorial Bridge on Saturday when the incident took place. An officer was following him at the time of the crash, ABC News affiliate WABC-TV reported. The posted speed limit for the Gold Star Memorial Bridge is 55 mph. Hofler was detained and taken to Lawrence and Memorial Hospital with minor injuries, police said. He has been summonsed for violations including reckless driving and driving on a suspended license and possession of marijuana. “Speeding and live streaming is not only dangerous, it is illegal,” Connecticut State Police said on Facebook in relation to the crash. “Thankfully, this operator was wearing his seatbelt, or they could have suffered serious injuries. Please slow down and drive safely.” It is unclear if Hofler has retained an attorney.