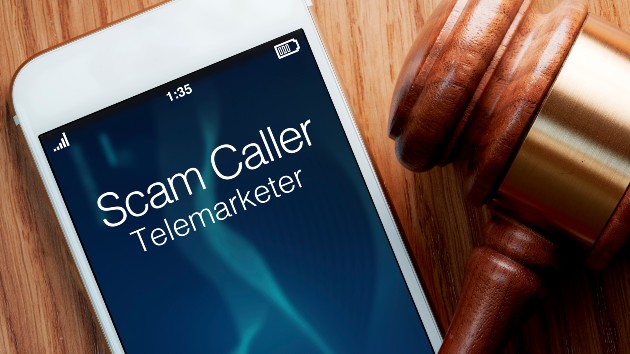 Bill Oxford/iStock(WASHINGTON) — President Donald Trump has signed a new law aimed at tackling the scourge of illegal robocalls. The bipartisan legislation expanded the power of the Federal Communications Commission (FCC) to deter spam calls and reinforced the responsibility of individual phone companies to protect their own consumers. The Telephone Robocall Abuse Criminal Enforcement and Deterrence Act, or TRACED Act, increases fines on spam robocallers from $1,500 to as much as $10,000 per illegal call. It also requires phone companies speed up their adaptation of “call authentication technologies” to verify that incoming calls are legitimate before ever reaching consumers.While consumers can buy software like Hiya and YouMail to help weed out the billions of robocalls that Americans collectively receive each month on cellphones, this new legislation thrusts the responsibility on service providers to block those calls from ever reaching consumers. The law also requires the FCC and service providers to develop a system which informs customers when they’re receiving a “spoofed” call — when the caller ID is made to look like it’s coming from the same area code, a well-known agency, such as the Internal Revenue Service, or a company. That system, however, will not work for home phones connected to copper landlines, so the measure calls on the FCC and phone companies to find an alternative for those customers.Another key takeaway from the new legislation is that it allows the FCC four years to intervene and collect fines after an illegal robocall takes place instead of only one, as with previous legislation. The additional time may prove helpful. According to the Wall Street Journal, the FCC collected only 0.003 percent of the fines it imposed between 2015 and early 2019. The FCC is also now required do more to try to protect hospitals because robocalls can divert staffers’ attention when they appear to come from inside the hospital. Beyond robocalls, the law also directs the FCC to create new rules that will help protect subscribers from receiving unwanted texts too. Faking caller ID numbers and placing automated telemarketing calls to consumers without their written permission is already illegal in the U.S., but enforcing their subsequent fines has come with hurdles. While U.S.-based robocalls are easier to trace, many of the robocalls that Americans receive originate from overseas, and Consumer Reports says those will likely continue without sufficient interruption. Since it was first introduced in November 2018, Sen. John Thune, R-S.D., championed the bill along with Sen. Ed Markey, D-Mass., and Rep. Frank Pallone, D-N.J. It passed Congress in 2019 with overwhelming bipartisan support: 417-3 in the House and 97-1 in the Senate.The law going into effect represents a rare, bipartisan victory in a Congress otherwise paralyzed by partisan politics and impeachment. Thune took to Twitter Tuesday morning to share the news.

It's official. Last night, @POTUS signed my #TRACEDAct that will help combat annoying and illegal #robocalls — It's now the law of the land.Proud to see this legislation through from start to finish. https://t.co/w0kNTGmXSW

FCC Chairman Ajit Pai also issued a congratulatory statement.”Specifically, I am glad that the agency now has a longer statute of limitations during which we can pursue scammers and I welcome the removal of a previously required warning we had to give to unlawful robocallers before imposing tough penalties,” Pai said. The legislation comes after Americans’ phones rang five billion times in the month of November due to robocalls alone — almost 2,000 calls per second — according to a May report by the Senate Committee on Commerce, Science and Transportation. The report also estimated that nearly half of all calls to cellphones are scam robocalls.”American families deserve control over their communications, and this legislation will update our laws and regulations to stiffen penalties, increase transparency, and enhance government collaboration to stop unwanted solicitation,” White House press secretary Stephanie Grisham said in a statement Monday night, when the president signed the legislation. USTelecom, a phone industry trade group, praised the bill’s passage, saying it “will supercharge” the fight against robocallers.

The Rep @FrankPallone/@SenJohnThune #TRACEDact has been signed by #POTUS, officially enacting a law that will go a long way in the fight to stop illegal #robocalls.@YahooFinance's @benwerschkul

However, while some experts predict that as phone companies put more tools in place to combat robocalls, scammers will find new ways to reach victims. To prevent that, the FCC in December 2019 launched a study on blocking robocall services and their effectiveness. Copyright © 2020, ABC Audio. All rights reserved.