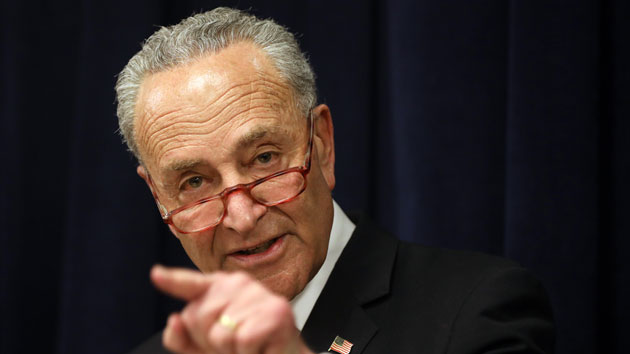 Spencer Platt/Getty Images(WASHINGTON)– Citing freshly leaked emails in which a White House budget official describes “clear direction from POTUS” on U.S. aid to Ukraine, Senate Democratic Leader Chuck Schumer on Thursday said the new evidence makes clear that top aides to President Donald Trump should be forced to testify in a Senate impeachment trial.Schumer’s comments are at odds with Senate Majority Leader Mitch McConnell, who has called for a swift trial without witnesses, at least not until other evidence has been presented.“The newly-revealed unredacted emails are a devastating blow to Senator McConnell’s push to have a trial without the documents and witnesses we’ve requested,” Schumer said in a statement.”These emails further expose the serious concerns raised by Trump administration officials about the propriety and legality of the president’s decision to cut off aid to Ukraine to benefit himself,” he added.The White House did not immediately respond to a request for comment, and McConnell’s office declined.The leaked emails expand on public understanding of what the White House told the Pentagon and State Department about a freeze on nearly $400 million in assistance to Ukraine, which continues to fend off Russian troops at its border. Congress had approved the money, and it was signed by the president into law. But witnesses testifying before the House this fall told lawmakers that they were told Trump had put a hold on the aid in mid-July.Questions have remained, however, as to why Trump was insisting on the hold when both the Pentagon and State Department had cleared the aid because Ukraine had met the necessary anti-corruption benchmarks. While acting White House Chief of Staff Mick Mulvaney has said the hold was because Trump was not a “fan” of foreign aid, the president in his July 25 phone call with Ukraine’s president asked the foreign power to investigate his political rival, Joe Biden, and Biden’s son, Hunter.Last month, the Center for Public Integrity obtained emails between OMB and the Pentagon through the Freedom of Information Act, but the documents were heavily redacted at the time, including the reference to “clear direction from POTUS.” On Thursday, the left-leaning watchdog group Just Security reported obtaining the contents of the email exchanges, including repeated warnings from acting Pentagon comptroller Elaine McCusker that the White House hold would violate the law, which requires the executive branch to spend money approved by Congress.At one point, Michael Duffey – a political appointee overseeing national security spending at OMB – told the Pentagon’s McCusker: “Clear direction from POTUS to hold.” The email, dated Aug. 30, according to Just Security, was the same day following Trump’s meeting with Secretary of State Mike Pompeo and Secretary of Defense Mark Esper. The New York Times reported that State Department Mike Pompeo and Defense Secretary Mark Esper, along with national security adviser John Bolton, advocated in late August for the aid be released.Schumer said this reference to Trump – POTUS refers to the president of the United States – “only further implicates President Trump and underscores the need for the Senate to subpoena the witnesses and documents we’ve requested at the onset of a trial.”The White House has declined to cooperate with the House Democratic inquiry, and House Speaker Nancy Pelosi said she won’t send over articles of impeachment to the Senate until she knows what the trial would look like. On Thursday, following the Just Security post, Pelosi accused Trump of engaging in “unprecedented, total obstruction of Congress, hiding these emails, all other documents, and his top aides from the American people.”His excuse was a phony complaint about the House process. What’s the excuse now? Why won’t Trump & McConnell allow a fair trial?” she tweeted.

Trump engaged in unprecedented, total obstruction of Congress, hiding these emails, all other documents, and his top aides from the American people.His excuse was a phony complaint about the House process.What’s the excuse now? Why won’t Trump & McConnell allow a fair trial? https://t.co/S3ZlEJMMDB

Following the House impeachment vote, the Senate Republican leader accused House Democrats of “partisan rage” that will create a “toxic new precedent that will echo well into the future.””For the very first time in modern history we have seen a political faction in Congress promise from the moment a presidential election ended that they would find some way to overturn it,” McConnell said last month. Copyright © 2020, ABC Audio. All rights reserved.