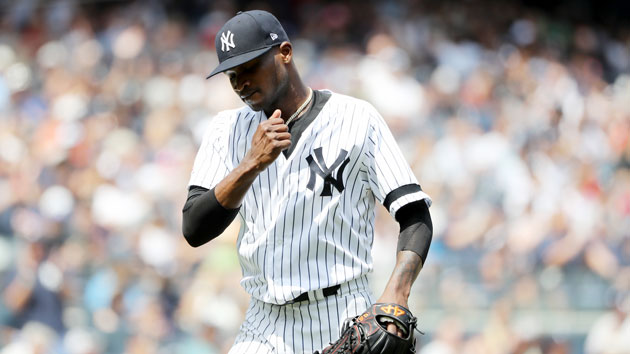 The suspension includes the nine regular season games Germán missed when he was placed on administrative leave on Sept. 19, as well as the Yankees’ postseason games. That leaves 63 games to be served on Germán’s suspension.

The league has yet to disclose what caused the violation.

The Yankees issued a statement on the suspension, expressing support for Commissioner Rob Manfred’s decision.”We remain steadfast in our support of Major League Baseball’s investigative process and the disciplinary action taken regarding Domingo Germán,” the statement said. “Domestic violence – in any form – is a gravely serious matter that affects every segment of our society.”

Statement from the New York Yankees regarding MLB’s discipline of Domingo Germán: pic.twitter.com/huqHbYnJPA

Germán will not appeal the suspension, according to MLB’s announcement. He will make a contribution to Sanctuary for Families, a New York City-based non-profit organization dedicated to aiding victims of domestic violence.For violating the league’s domestic violence policy, Germán will also have to go through a “comprehensive evaluation and treatment program.”Copyright © 2020, ABC Audio. All rights reserved.

NFL owners approve overtime rule change but only for playoffs