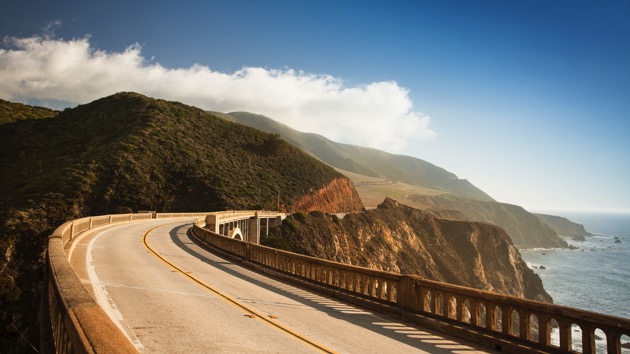 Pgiam/iStock(HALF MOON BAY, Calif.) — Authorities in California are desperately searching for an SUV and its occupants after it was captured on video driving on a highway shoulder and then flying off a cliff.In the 170-second video released by the San Mateo County Sheriff’s Office, the dark-colored vehicle can be seen traveling northbound and then shooting across State Route 1 just south of Gray Whale Cove State Beach in Half Moon Bay, Calif., before disappearing from view.A person who was traveling on the multi-lane highway saw the SUV and captured the dramatic moment on video at around 11 a.m. on Monday, according to the San Jose Mercury News.In the video, the person pans their camera over the highway and then to the right, facing the ocean. Then, suddenly, the SUV passes in front of the car to the right, goes airborne and disappears from the frame.California Highway Patrol Officer Bert Diaz told ABC News on Thursday that it was hard to determine from the video how fast the car was going before it went off the cliff. He said the fall was about 100 to 150 feet to the ocean.Police said they believe the car plunged away from the jagged cliff embankment into the water below, which they estimated to be 30 to 40 feet deep.”It’s hard to determine as to what exactly happened. … What we saw is what everyone else has seen,” Diaz said. “It’s hard to say if it was intentional, if it was an accident or if there was any foul play but we’re looking into everything. … We do know from what we’ve gathered that the vehicle did not collide with the rocks or with the hillside. … We believe that it might have just submerged into the water.”Authorities spent Monday looking for the car and its possible occupants, and said they found tire tracks on the cliff and car parts in the Pacific Ocean. It was still unclear, though, whether the tracks and parts actually belonged to the missing vehicle.The Coast Guard along with the California Highway Patrol and local authorities have been looking for answers to the mysterious incident along Highway 1. Half Moon Bay is home to a breathtaking oceanside community where the highway snakes along the oceanfront. Diaz said authorities had put out a missing-person report and were tracking leads. He said police had not yet received any reports of a missing person or missing vehicle.So far, a high-surf advisory — with swells of up to 14 feet and powerful rip currents — has hampered search efforts.It remained unclear how many people were in the car at the time of the video and authorities said that even if and when the weather calmed, they might not ever find the SUV.Copyright © 2020, ABC Audio. All rights reserved.