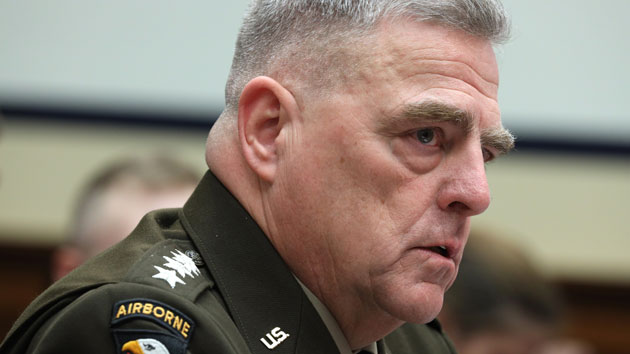 Alex Wong/Getty Images(WASHINGTON) — America’s top military officer said he is “100 percent” confident that Qasem Soleimani, the Iranian commander killed in Thursday’s strike, approved the attack on an Iraqi military base at the end of last month that killed a U.S. contractor.Chairman of the Joint Chiefs of Staff Gen. Mark Milley told a small group of reporters on Friday that within the last 90 days Kata’ib Hezbollah (KH), an Iranian-backed militia, organized a sophisticated campaign against U.S. and coalition forces that increased in intensity, culminating with the Dec. 27 attack on the Iraqi base near Kirkuk that killed an American civilian contractor and wounded several U.S. and Iraqi forces.It was “designed and intended to kill, and [Soleimani] approved it,” Milley said, adding, “I know that 100 percent.”Milley said that the trigger for the drone strike that killed Soleimani was “clear, unambiguous intelligence indicating a significant campaign of violence against the United States in the days, weeks, and months,” and that the administration would have been “culpably negligent” if it didn’t act.U.S. officials have blamed Soleimani for the killing or wounding of thousands of Americans in Iraq and elsewhere for well over a decade. The Iranian commander, the leader of Iran’s Quds Force — a U.S.-designated Foreign Terrorist Organization — had just arrived in Baghdad when his motorcade was bombed in a mission tasked to Joint Special Operations Command late Thursday night.”Soleimani arrived at a target of opportunity, he arrived at the airport, and we had an opportunity and based on this president’s direction we took it,” a senior defense official said on Friday.The senior official said the U.S. military had the authority before Thursday’s strike to “take that action” against Soleimani with a separate U.S. official saying the authority was given last Friday by the president during a meeting with his national security team at his Mar-a-Lago Resort in Florida.Milley said the administration fully comprehends the strategic risks and consequences of killing Soleimani but “risks of inaction exceeded risks of action.””Is there risk? Damn right, there is risk, but we’re mitigating it,” Milley said later.The Pentagon is deploying roughly 3,500 more troops from the 82nd Airborne Division to the Middle East in response to rising tensions with Iran. Those troops will join about 750 soldiers from the 82nd that already arrived in Kuwait, as well as 100 Marines who deployed at the U.S. Embassy in Baghdad to reinforce security there after violent protests on New Year’s Eve from KH militiamen and supporters.Earlier on Friday, Secretary of State Mike Pompeo defended the decision to strike Soleimani in a TV interview, saying that the commander was “working actively” on an “imminent attack” “that would have put hundreds of live at risk.”According to a senior State Department official, Soleimani had recently visited and was planning attacks against U.S. interests in Lebanon, Iraq, and Syria.Asked what made these threats “imminent” as Pompeo described, Milley replied that it was the “size, scale, and scope” of the planned attacks. But, despite Soleimani’s death, the general warned attacks on American personnel and facilities could still take place.Still, the senior defense official expressed optimism that the death of Soleimani “is going to be a significant disruption to ongoing plotting and planning.””There is a range of possible futures here, and the ball is the Iranian court right now,” Milley said. Copyright © 2020, ABC Audio. All rights reserved.