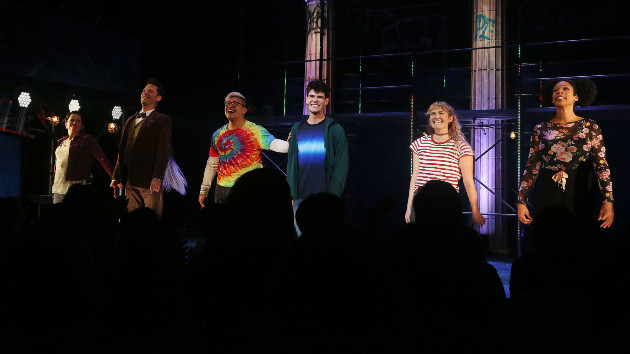 Bruce Glikas/WireImage(NEW YORK) — The Lightning Thief: The Percy Jackson Musical ends its quest on Broadway this weekend, after a successful limited run that kicked off in September.

The musical, based on Rick Riordan’s best-selling novel, stars Chris McCarrell as Percy Jackson, the teen son of Poseidon, as he goes on a journey to find Zeus’ lightning bolt in order to prevent a war between the Greek gods.

The show has become part of the pop culture conversation, popping up everywhere from Jeopardy! to a mention in Chance the Rapper’s SNL monologue. It’s something the cast — the majority of whom made their Broadway debuts in the show — could never have imagined.

“The fact that our show has slowly crept into pop culture moments like Jeopardy! or billboards in Times Square…I mean, that’s like my middle school dream,” McCarrell tells ABC Audio. “You create a show that…you feel like you’ve instilled part of your soul and your personality into, and then watch it just become bigger and bigger.”

McCarrell has been with the show since it originated Off-Broadway in 2017. Once it concludes its Broadway run, he’ll be ready for the change.

“I play so young in the show,” he says. “So I’m ready to get back in touch with my 28-year-old self after the show closes.”

As for co-star Ryan Knowles, who plays no fewer than nine characters in the show, he’s looking forward to a vacation.

“It’s been a wonderful and perfect year on the road with the show and back in New York with it, but it’ll be great to have like two weeks away someplace,” he says.

The Lightning Thief: The Percy Jackson Musical has its last show on Sunday, January 5.