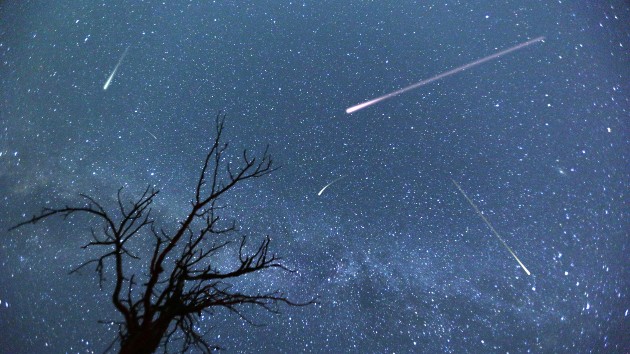 Cylonphoto/iStock(NEW YORK) — The year’s first Quadrantid meteor will light up the sky this weekend. The spectacle, considered by NASA to be “one of the best annual meteor showers,” will be best seen in the Northern Hemisphere from Jan. 3 – 4, according to the American Meteor Society. In perfect conditions during its peak, Quadrantids can illuminate the sky with as many as 200 meteors and fireballs, an explosion of light and color that typically lasts longer than the average meteor streak, according to NASA.The American Meteor Society described the Quadrantid meteor as “fairly bright and easily seen,” but noted that faint meteors could often occur, especially at times of high activity. Those interested in catching a glimpse of the Quadrantids should plan ahead and find a spot away from city lights. Dark skies make for the best viewing opportunities.The meteor has a shorter peak than most — just a few hours compared to the standard couple of days. Revelers are encouraged to begin their gazing at least an hour before the predicted peak times, which are 3:20 EST, 2:20 CST, 1:20 MST, and 12:20 PST on the morning of Jan. 4.The best way to look at the meteor will be facing the northeast quadrant of the sky and centering your view about half-way up, according to the American Meteor Society. Quadrantids are also unique because of where they originate from: an asteroid. Asteroid 2003 EH1 was discovered in March 2003, according to NASA. The space agency said it takes 5.52 years to orbit the sun once and it is possible that 2003 EH is a “dead comet” or a new kind of object, described by astronomers as a “rock comet.”Copyright © 2020, ABC Audio. All rights reserved.