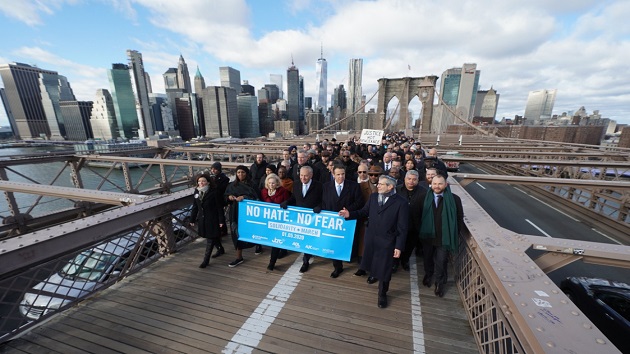 Twitter/@NYGovCuomo(NEW YORK) — In a massive display of solidarity against anti-Semitism, more than 10,000 people, including New York’s governor, marched across the Brooklyn Bridge on Sunday to protest a recent string of hate attacks in the New York-New Jersey region, including a machete rampage at a rabbi’s home Hanukkah celebration.The demonstrators chanted “No Hate, No Fear” as they gathered in Foley Square in Lower Manhattan and marched across the bridge to Cadman Square in Brooklyn accompanied by a heavy police presence.New York Gov. Andrew Cuomo kicked off the march by announcing the state will spend an additional $45 million to protect faith-based groups from being targeted for hate crimes.”I’m heartened to see this amazing show of support and solidarity. Literally over 10,000 people have shown up to show support and love for the Jewish community, and that’s New York at her best,” Cuomo said.The protest came a week after a man armed with a machete stormed a Hanukkah celebration at a rabbi’s home in the New York City suburb of Monsey, stabbing six members of the ultra-Orthodox Hasidic Jewish congregation.Authorities arrested 38-year-old Grafton Thomas in the attack and discovered his journals contained anti-Semitic sentiments, including references to Hitler and “Nazi Culture” “on the same page as drawings of a Star of David and a Swastika,” according to a criminal complaint charging him with federal hate crimes. A Rockland County, New York, grand jury also indicted Thomas on six counts of second-degree attempted murder, three counts of first-degree assault, three counts of first-degree attempted assault and two counts of first-degree burglary,The Hanukkah rampage followed at least 13 anti-Semitic attacks in the New York-New Jersey region, including nine in New York City.On Dec. 10, a man and a woman stormed a Jersey City, New Jersey, kosher supermarket, in an apparent act of domestic terrorism and fatally shot three people before they were both killed by police. The alleged shooters, David Anderson, 47, and Francine Graham, 50, are also suspected of killing Jersey City Det. Joseph Seals that same day in a cemetery about a mile from the kosher market, and were prime suspects in the killing of an Uber driver, whose body was discovered on Dec. 7 in the trunk of a car in Bayonne, New Jersey, authorities said.Both Anderson and Graham are believed to have expressed interest in the Black Hebrew Israelites, a group that espouses hatred toward Jews and is known for anti-government and anti-police sentiments, sources told ABC News.”The recent rash of anti-Semitic and other hate-fueled attacks in New York and across the nation are understandably causing anxiety, but we will not be intimidated,” Cuomo said.He said the funding to protect faith-based groups will come from the state’s new Securing Communities Against Hate Crimes Grant Program and could also go to daycare centers, community centers, cultural museums, day camps, and non-public schools associated with organizations that may be targets of potential hate crimes.”In New York, we stand up to those who try to sow division and fear, and this new funding will provide religious and cultural institutions the support they need to help protect themselves and keep people safe,” Cuomo said. “We will not let the cancer of hate and intolerance weaken us, we will continue to stand up and denounce it every time it rears its ugly head.”The governor was joined at the demonstration by New York City Mayor Bill de Blasio, New York Senators Chuck Schumer and Kirsten Gillibrand and other New York political and religious leaders of all stripes.Sunday’s protest was sponsored by the Jewish Community Relations Council of New York, the Anti-Defamation League, the American Jewish Committee and the New York Board of Rabbis.”We as a Jewish community are standing together with the top elected officials of this state and city of New York and thousands upon thousands of New Yorkers, Jews who have come from across this country and from around the world to say, ‘No hate and no fear,"” said Michael Miller, executive vice president and chief executive officer of the Jewish Community Relations Council.Copyright © 2020, ABC Audio. All rights reserved.