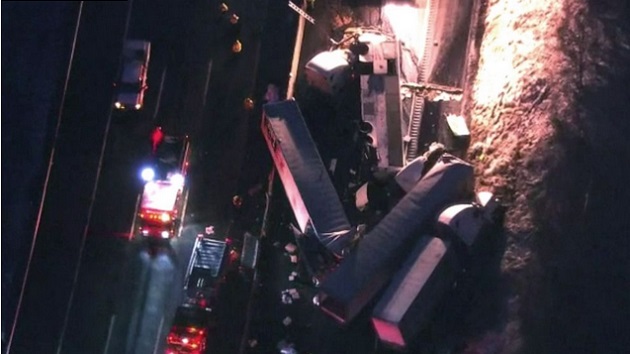 WTAE(NEW STANTON, Penn.) — At least five people were killed and 60 were injured early Sunday in a vehicle pileup on the Pennsylvania Turnpike that involved a bus full of foreign tourists headed from New Jersey to Ohio, officials said.The chain-reaction crash occurred around 3:40 a.m. on the turnpike near New Stanton, about 35 miles southeast of Pittsburgh, officials said.Trooper Stephen Limani, a spokesman for the Pennsylvania State Police, confirmed at a news conference the number of deaths and injuries in the pileup.At the time of the crash, temperatures were just below freezing with fog and intermittent light snow, leading investigators to suspect that weather may have been a factor in the crash, Limani said.He identified the tour bus involved in the crash as belonging to Z&D Tours in Rockaway, New Jersey. He said the bus was headed from New Jersey to Cincinnati when the horrific crash unfolded.Limani said the operator of the bus appeared to have lost control, causing the chain-reaction wreck.”As they were traveling, that bus was headed on a downhill grade and the bus was unable to negotiate a corner,” Limani said. “That bus went up an embankment, rolled over and then was subsequently struck by two tractor-trailers.”Limani said a third tractor-trailer and a passenger car plowed into the wreckage.The pileup closed the turnpike in both directions. Limani said the vehicles involved in the crash were so entangled that officials may not be able to open the turnpike until Sunday evening.At least 36 people, ranging in age 7 to their 60s, were being treated for injuries at Forbes Hospital in nearby Monroeville, Pennsylvania, according to Limani. Two of the victims were in critical condition, he said.He said the majority of the passengers on the bus were foreign tourists. He said it remains unclear what countries the bus passengers are from, but said most spoke either Japanese or Spanish.Aerial video shot by ABC affiliate station WTAE in Pittsburgh showed the tour bus on its side surrounded by three wrecked tractor-trailers rigs, including a FedEx truck with its trailer split open and packages spilling onto the roadway.Multiple victims were reported trapped in vehicles, including the overturned bus, and had to be rescued, authorities said.The discount bus is associated with Ohio Coach, according to the New York Times.Chen Dan Yu, owner of Z&D Tours, told the New York Times that Ohio Coach sold tickets for his company. Yu told the newspaper that 56 passengers were aboard the bus and were headed to multiple destinations in Ohio.The pileup comes just two weeks after more than 50 people were injured in a 69-vehicle crash on Interstate 64 near Williamsburg, Virginia. Heavy fog and an ice-slickened highway contributed to the Dec. 22 wreck, officials said. Copyright © 2020, ABC Audio. All rights reserved.