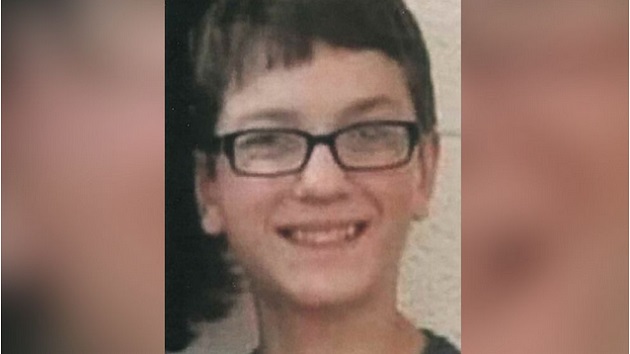 Port Clinton Police Department(PORT CLINTON, Ohio) — Police provided new background information on a Port Clinton, Ohio, 14-year-old who has been missing since the morning of Dec. 20.A surveillance image believed to be Harley Dilly crossing the street in front of his house is the last known sighting of the teenager, said Detective Ronald Timmons with the Port Clinton Police Department on Saturday night, during an appearance on “Live PD on A&E.”It is out of character for Harley to just disappear, Timmons confirmed. The teen has a very specific schedule eating certain foods, bathing several times a day and typically “stays around his home,” Timmons said.Police believe Harley is in danger.It was 18 degrees with snow on the ground when he left his home and he was last seen wearing a thin sweater, sweatpants and a thin “puffy” coat, police said.All of which “leads us to believe he wasn’t planning on being outside for an extended amount of time,” Timmons said. “He was going to meet with somebody, somebody we haven’t identified yet.”Several organizations have raised almost $10,000 in reward money for any information leading to the teen’s safe return.Dilly’s mother, Heather Dilly, spoke publicly for the first time on Friday since her son went missing.”There’s no words for any of this. I would never want anybody to go through this,” Heather Dilly told Cleveland ABC station WEWS. “I mean, somebody had to have seen something.”She said the investigation is taking so much longer than she anticipated and is praying her son comes home safely.”You see everything on TV, you watch all these crime shows and you think, ‘oh, that’s never going to happen.’ And they solve it in an hour. It doesn’t take an hour to find out everything,” she said. “I love you Harley, please come home. Please, I just … We need you, I don’t believe that you ran, but if you did just please, this isn’t you.”Timmons said that Harley’s cellphone was broken at the time he left his residence. The 14-year-old also has a “big social media presence” with accounts on Instagram, Facebook, YouTube and Reddit. There has been no activity on those accounts since his disappearance.Harley is 4 feet 9 inches tall, weighs 100 pounds, has brown hair and green eyes and was wearing glasses when he disappeared.Officials are asking anyone with information about his whereabouts to call the Port Clinton Police Department 419-734-3121.