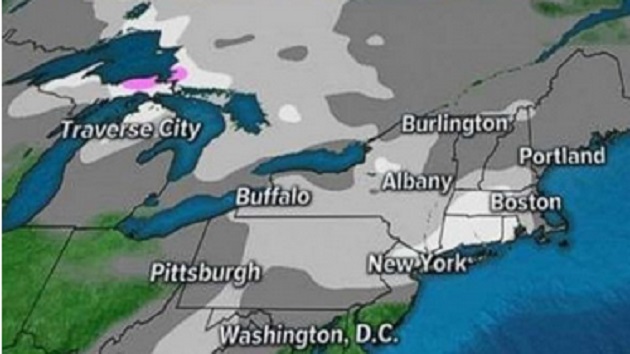 ABC News(NEW YORK) — A pair of cold fronts brought some snow to the U.S.-Canada border in the Northeast and rain across much of the U.S. East Coast.Four inches of snow were reported in both northern New York and parts of Vermont from the system. Further south in Florida, storms forming along the cold front tapped into the some very mild air and produced two reported tornadoes, including one in Volusia county that did damage to buildings.A quick-moving storm is already moving through parts of southern Canada this morning and is on the way to the Northeast U.S.By Monday morning, a couple of quick bursts of snow are possible in parts of the Northeast, especially near the Great lakes in Pennsylvania and New York.A couple of these snow showers may make It down to the I-95 corridor but because the snow will be moving quickly, accumulations should be rather light with the best chance for any notable accumulation in the Northeast.On Tuesday a disturbance could form in the Ohio Valley. Initially, there should be enough cold air to support snow in parts of the Appalachians in parts of eastern Kentucky and in West Virginia.The disturbance should quickly jet off to the Northeast during the day on Tuesday and into Tuesday night. Forecast models have trended just a touch colder this morning and indicate the system should try to strengthen and bring a rather defined hit of snow to the northeast on Tuesday evening.The most concerning trend with the forecast models since Saturday is that both very reliable global models, the American GFS model, and the infamous Euro model, are indicating this colder solution this morning.Therefore, it is looking a little more likely that there could be a snow event on Tuesday in the northeast cities — including Philadelphia, New York and Boston — that will likely cause travel delays to some degree.The storm will exit the region by Wednesday morning. As the storm strengthens, it is also likely that gusty winds will develop, especially along the coastline in New England.A general swath of locally 3 inches or more seems possible in a good chunk of the Northeast through Tuesday. However, near or above freezing temperatures, especially along the coast could limit the accumulation as well as the atmosphere’s ability to produce snow.Regardless of exact accumulation, travel delays do seem likely at this point.Behind this system, the next pronounced weather trend is the very mild air that will be moving into parts of the central U.S. and much of the East Coast. Temperatures toward the end of the week are looking 15 to 20 degrees above average in spots. This mild trend looks to continue through the middle of the month.This is rather notable considering that we are entering the colder time of the year for much of the eastern half of the nation. For parts of Michigan, Boston, and New York to see temperatures reaching near or above 50 degrees, perhaps for consecutive days, is notable. Copyright © 2020, ABC Audio. All rights reserved.