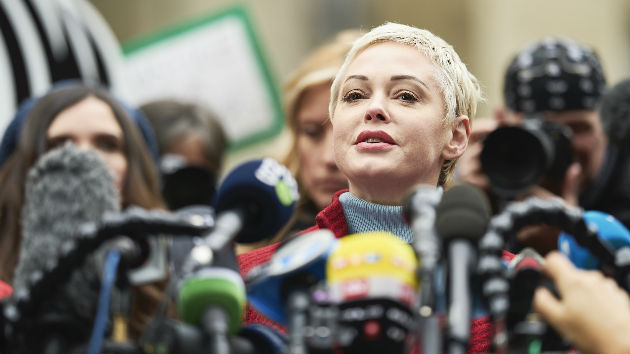 Rose McGowan — Photo credit: © Laura Barisonzi for TIME’S UP Foundation(NEW YORK) — (NOTE CONTENT) As Harvey Weinstein’s sexual assault trial got underway in New York City Monday, a group of his alleged victims, among them actresses Rosanna Arquette and Rose McGowan, spoke out against him.

These so-called “Silence Breakers” — who represent the more than 90 women who’ve accused the disgraced movie mogul of everything from inappropriate behavior to rape — took turns at the microphone.”While the emotion of the day runs high, I join these other brave women who were also harmed by Harvey Weinstein to say that we aren’t going anywhere,” said Arquette, who starred in Pulp Fiction, which Weinstein produced.

“The truth will prevail. And whether it is this trial or in the future, Harvey will be held accountable for his actions.”For her part, McGowan addressed Weinstein directly, via a letter she read aloud.

“Dear Harvey, no matter what lies you tell yourself, you did this,” she said.

“Today, Lady Justice is staring down a super-predator: you. You brought this upon yourself by hurting so many. You have only yourself to blame. You thought you could terrorize me and others into silence. You were wrong.”She added, “Know this: We are free, we are beautiful and we are strong and you will never take that from us…Survivors will never give up.”A total of six women are expected to testify under oath that Weinstein sexually assaulted them, but he is only charged with attacking two.

He stands charged with raping one woman in a Manhattan hotel room in 2013 and performing a forcible sex act on a different woman, a former Weinstein production assistant, in 2006. He has pleaded not guilty to all charges against him and has denied ever engaging in non-consensual sex with anyone.