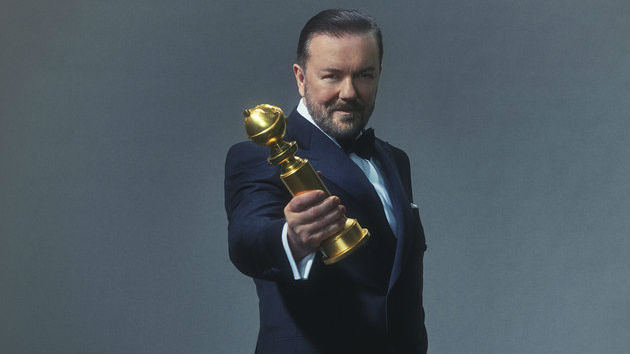 Photo by: Todd Antony/NBC(LOS ANGELES) — The 77th annual Golden Globe awards was a night of celebration for the big winners, but it was also a night of sobering speeches, with celebrities referencing recent politics, climate change and the devastating fires in Australia.

Here are the highlights:The big winners

The Sam Mendes World War I film 1917 — which isn’t even in wide release yet — won Best Drama, with Mendes also taking home Best Director. Once Upon a Time in Hollywood took home three awards, including Best Musical or Comedy and Best Supporting Actor for Brad Pitt.The big winners in TV were Amazon’s Fleabag and HBO’s Succession, which both nabbed two trophies.It was also a good night for first-time wins. Ramy Youssef, Awkwafina and Taron Egerton were among those who picked up their first ever Golden Globes. Ricky Gervais makes us laugh and cringe

Five-time host Ricky Gervais pulled no punches in his monologue, but did we really expect any less? “Let’s have a laugh at your expense, shall we?” he began. “Remember they are just jokes. We are all going to die soon and there is no sequel.”He took jabs at everyone from Felicity Huffman to James Corden to Judi Dench, in a joke that had to be bleeped by the censors. He also compared Joe Pesci to Baby Yoda and called out the Hollywood Foreign Press for being “very, very racist.”Stars get political

Russell Crowe wasn’t there to accept his award for The Loudest Voice because he was in Australia protecting his family from the raging brush fires. But he did send a message for presenter Jennifer Aniston to read. He called the tragedy in Australia “climate change based” and called on the world to “move our global work force to renewable energy and respect our planet for the unique and amazing place it is.”Later in the show, fellow Aussie Cate Blanchett gave a shout out to her home country’s volunteer firefighters.Patricia Arquette and Michelle Williams gave two of the most politically-charged speeches of the night. Arquette, who won for her role in The Act, called out President Donald Trump for putting the U.S. on “the brink of war” and urged everyone to vote this year. Williams, who won for Fosse/Verdon, delivered a speech about a woman’s right to choose. She called on women to vote in this year’s election in “their own self interest.” “Let’s make [the country] look more like us,” she said.And in a f-bomb laden speech, Joaquin Phoenix called on celebrities to make more changes in their own lives to help the environment. “We don’t have to take private jets to Palm Springs and back,” he said.Ellen DeGeneres and Tom Hanks honored

Two of the most-well-liked people in Hollywood, Ellen DeGeneres and Tom Hanks, were bestowed with major honors. Ellen received the Carol Burnett Award for her achievements in television and was presented the honor by Kate McKinnon, who gave a heartfelt speech thanking Ellen for making her feel like it was “less scary” to be gay.In her own speech, Ellen told the audience she’s been an open book throughout her career and then jokingly thanked her husband “Mark” and her two kids, “Rupert and Fiona.”Charlize Theron presented Tom Hanks with the Cecil B. De Mille Award for lifetime achievement and he immediately got choked up while thanking his family, who were all in attendance.

Magic, mayhem and laughs in new trailer to ‘Dungeons and Dragons: Honor Among Thieves’

“Can this honestly get any better?”: Selena Gomez reveals Meryl Streep has joined ‘Only Murders in the Building’

Critics Choice Awards 2022: ﻿’Everything Everywhere All At Once,’ ‘Better Call Saul’﻿ win big