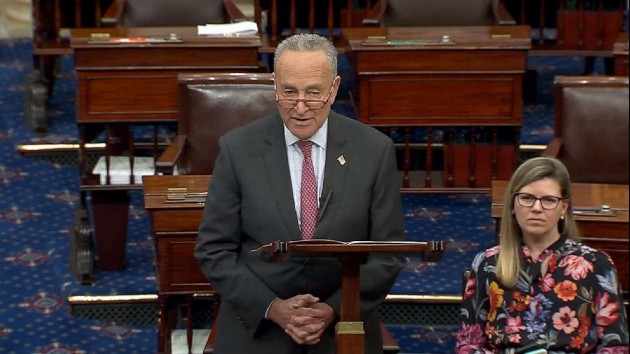 ABC News(WASHINGTON) — Senate Minority Leader Chuck Schumer on Monday challenged four Senate Republicans to join Democrats in calling for witnesses at a Senate impeachment trial, saying to do otherwise would be “participating in a cover-up.” Schumer cited a new statement Monday from President Donald Trump’s former national security adviser, John Bolton, that he was “prepared to testify” as a reason for the Republicans to help Democrats form the majority needed to demand, before a trial starts, that Bolton and three other witnesses testify.”A simple majority is all it takes to ensure that the Senate issues a subpoena for these witness if only four Republicans decide that Mr. Bolton and the three other witnesses ought to be heard, they will be heard because every Democrat will vote to hear them,” Schumer said, speaking on the Senate floor. “Given Mister Bolton’s lawyers have stated has new and relevant information to share, if any Senate Republican opposes issuing subpoenas to the four witnesses and documents we’ve requested, they would make it absolutely clear they are participating in cover-up,” he said. Among the Republicans Democrats are targeting are Sen. Lisa Murkowski of Alaska and Sen. Susan Collins of Maine, who has said she is “open to witnesses,” although later in a trial.Besides Bolton, Schumer is demanding testimony from acting White House chief of staff Mick Mulvaney, Associate Director for National Security at the Office of Management and Budget Michael Duffey, and senior adviser to the acting White House chief of staff, Robert Blair — all of whom Democrats say knew why and how Trump ordered military aid to Ukraine withheld but who refused to participate in the House investigation. Schumer said Democrats would force a vote on each witness, making the Republicans go on the record on how a trial would be conducted.

“Make no mistake, there will be votes,” he said. “My colleagues on the other side of the aisle, your constituents and the voice of history is watching. You will be required to vote on whether we have a fair trial with witnesses and with documents or you will say I’m running away from the facts, I’m scared of the facts or go for a cover-up,” Schumer said. “I believe a fair trial is one that considers all the relevant facts that allows for relevant witnesses and documents, a feature of every single impeachment trial of resident in the history of our nation. We have never had one with no witnesses, not once,” Schumer said, responding to Senate Majority Leader Mitch McConnell. McConnell has argued that the question of witnesses should be treated the same as it was in the 1999 impeachment trial of President Bill Clinton, in which senators agreed beforehand they would vote on having any witnesses in the middle of a trial, only after senators had heard arguments on the evidence. “He doesn’t want a fair trial,” Schumer said. “He wants a quick and sham trial. Now, it’s up to every senator – every other senator – every senator will have a say – which of the two of us wins out? Will we have a fair trial or a coverup?”McConnell so far has not budged after House Speaker Nancy Pelosi said she wouldn’t forward the articles of impeachment, passed almost three weeks ago, to the Senate until Democrats were assured there would be a fair trial, including witnesses. Gesturing toward McConnell, Schumer said, “Give a specific answer why these witnesses should not come forward. Don’t call names. Don’t finger point. Don’t get angry at Nancy Pelosi. Tell us why here in the Senate witnesses and documents should not come forward that are directly relevant to the charges against the president of the United States of America.” Just before Schumer spoke, McConnell again attacked Pelosi, and linked the impeachment stalemate to the escalating tensions with Iran. “For weeks Democrats said they could not wait for due process, could not conduct a normal or fair inquiry, because removing the president from office was so incredibly urgent, incredibly urgent. Well, the unseriousness obvious then and should be even more obvious now because Speaker Pelosi is now sitting on the articles she claimed were so very urgent,” he said. “She’s delayed this indefinitely so that the architects of the failed House process can look for ways to reach over here into the Senate and dictate our process as well.” “Even with a process this constitutionally serious, even with tensions rising in the Mideast, House Democrats are treating impeachment like a political toy. Like a political toy. Treating their own effort to remove our commander in chief like some frivolous game. These bizarre stunts do not serve our constitution or our national security. They erode both,” McConnell said. Copyright © 2020, ABC Audio. All rights reserved.