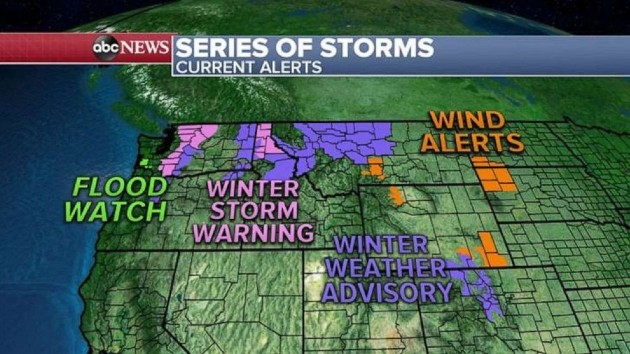 ABC News(NEW YORK) — A series of storms will impact the Pacific Northwest through the week with heavy rain that could lead to flooding and mudslides. As of Monday morning, we already have eight states under snow, wind and flood alerts.

On Monday, very heavy rain will continue for Washington and Oregon with flooding and some mudslides possible. Also, heavy snow in the Cascades and into the northern Rockies will make driving difficult on I-90 and I-84. By Tuesday into Tuesday night, even stronger storms will move into the West Coast spreading rain all the way down to northern California with heavy snow from Sierra Nevada to the Cascades.By Thursday afternoon and evening, the western storm will reach the Heartland with heavy rain from the Gulf Coast to the Great Lakes. This heavy rain will continue into Friday with some locations getting up to a half a foot with flooding being a big threat.Along the Gulf Coast we could see a severe weather outbreak with damaging winds and even a few tornadoes by the end of the week on Friday. In the West, some areas in Washington and northern Oregon could see near a half a foot of rain. In the mountains, up to 3 feet of snow could fall and avalanche danger could be a big threat by the end of the week.Copyright © 2020, ABC Audio. All rights reserved.