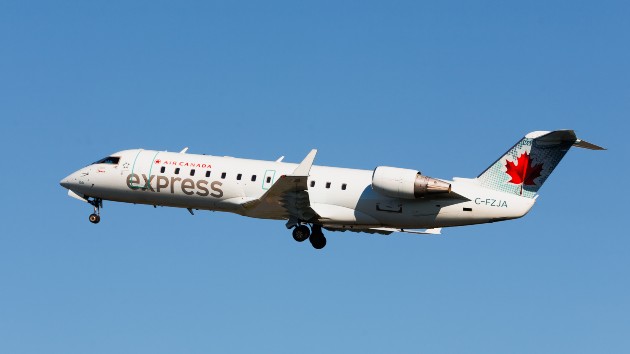 Kevin Brine/iStock(MONTREAL) — An Air Canada Express flight lost a wheel seconds after the plane lifted off the Montreal-Trudeau International Airport runway on Friday. Passenger video captured sparks and flames coming from the landing gear before the wheel detached.”I’m currently on a plane that has just lost a wheel,” the passenger posted. “2020 starting off well.”

The Dash 8-300 was headed for Bagotville, Canada, but the plane was forced to turn back. The pilot circled to burn fuel before making an emergency landing in Montreal. “This is a very tough airplane and it’s designed to be able to support the weight of the airplane on one wheel on each side,” ABC News’ Aviation Analyst John Nance said. Air Canada said emergency vehicles were called as a precautionary measure and that none of the 52 people on board were injured.”The experienced pilots maintained complete control of the aircraft,” the airline said in a statement to ABC News. The Transportation Safety Board of Canada says it is gathering information on the incident. Investigators have already been “in contact with the operator’s maintenance organization” to determine what went wrong, according to a spokesperson for the safety board.

Russia-Ukraine live updates: Peace talks may now be off the table, Zelenskyy says