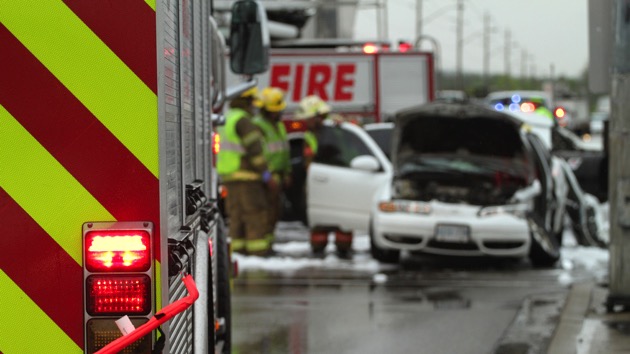 FILE photo – tillsonburg/iStock(CARMEL, Maine) — Blinding sun may have caused a massive crash involving about 30 cars on a Maine interstate Tuesday morning, state authorities said.The chain reaction accident was on Interstate 95 in Carmel.Some people were injured, including one person who was hurt seriously and transported to a hospital via helicopter, said Stephen McCausland, a spokesman for the Maine Department of Public Safety.

Maine Forest Rangers are assisting @MEStatePolice on the ground & with a helicopter for a serious multi-vehicle accident on Interstate 95 in Carmel. We have 4 forest rangers on the ground assisting with first-aid, traffic control and scene stabilization. pic.twitter.com/8Cdquw13Qx

The crash has closed the northbound lanes of the interstate, stranding several hundred drivers, said McCausland.A team of troopers and a fleet of wreckers have responded to help clear wrecked cars from the roadway.

This closure is expected to last much of the day. Northbound traffic should now use Exit 157 in Newport to avoid delays. https://t.co/HdfLuQVbFC

Initial reports say blinding sun may have caused the first crash at about 7:45 a.m., before other cars collided in a chain reaction, said McCausland.It’s also possible that the interstate was coated in a thin layer of ice. The temperature was near zero and a light snow shower moved through the area shortly before the crash.Copyright © 2020, ABC Audio. All rights reserved.