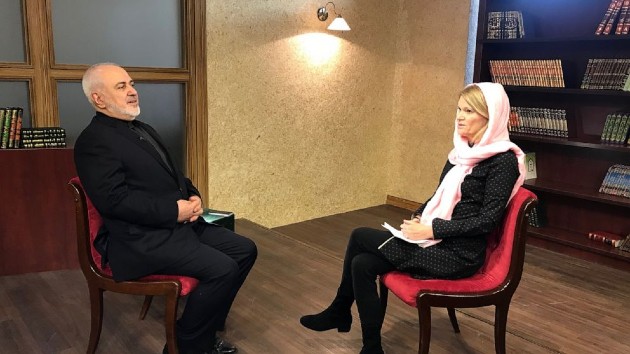 Cindy Smith/ABC News(TEHRAN, Iran) — Iranian Foreign Minister Mohammad Javad Zarif says the United States “will pay” for its actions and must “be prepared for the consequences” in the wake of the death of Maj. Gen. Qassem Soleimani, the head of Iran’s elite Quds Force who was killed by an American airstrike in Iraq last week. In a sit-down interview with Zarif in Tehran on Tuesday, ABC News Chief Global Affairs Correspondent Martha Raddatz asked, “Are you concerned that a strong response from Iran will end in an all-out war?” “That depends on the United States,” Zarif said. “The United States took an act of war against Iran; it will have to be prepared for the consequences. Then it will have to decide whether it wants to get itself into a quagmire or whether it wants to stop.”Zarif said his country is a “very patient” one and will take action “after necessary deliberation” and “at a time of our choosing.” He added that Iran will announce and claim responsibility for whatever counteraction it decides to take.”The United States committed three great mistakes, and they will pay for all three mistakes,” Zarif said. “The first mistake was they violated the Iraqi sovereignty and territorial integrity, and because of that they received a response from the Iraqis — they cancelled their agreement, which the United States had already violated by not informing the Iraqis.” Zarif may have been referring to the Iraqi Parliament’s weekend vote to kick foreign forces out of the country. “Second,” he continued, “they had the emotions of a large number of people from India to Russia, not to mention Iran, Iraq. The popular reaction to that I think will be the end of U.S. presence in this region, and that would be a very high price to pay for the adventurism of a couple people. Third, they killed and claimed responsibility for murdering in a ‘terrorist’ operation one of our highest ranking generals in a foreign territory. The government of Iran is responsible for protecting the lives of its citizens and its officials, and so it’s obvious that we will respond.”As for the nuclear deal negotiated by the international community with Iran and signed under then-U.S. President Barack Obama in July 2015, Zarif said his country is “entitled to take certain remedial measures and we did that.” Over the weekend, the Iranian government announced it will no longer abide by any of the operational restraints on its nuclear program under the deal, from which the Trump administration withdrew the United States in May 2018. “As soon as Europe recognizes its own interest and decides to stand up for its own interest, we can reverse all of the measures we have taken,” Zarif said. “The deal is in a very difficult situation, but the deal can be maintained and must be maintained.”Zarif said the American government “has been compounding mistake upon mistake,” and that U.S. Secretary of State Mike Pompeo “is a personification of [the] mixture of arrogance and ignorance.” “The U.S. has already started paying for its crimes in Iraq, in the region and in Iran,” Zarif said. “I think before making more mistakes, before compounding the mistakes that they already have, the current U.S. regime has to acknowledge that they have adopted the wrong policy, that their policy was based on basically ignorance. Arrogance and ignorance when combined, it’s [a] disaster, and this is what’s happening in the United States.”Hundreds of thousands of people took to the streets of Tehran and other cities across Iran Monday for a day of mourning for Soleimani and in a show of support for the Iranian government. The crowds voiced anger at the U.S. drone strike and hailed the slain general as a national hero. The crowds flocked to Soleimani’s hometown of Kerman on Tuesday ahead of his burial, which was subsequently postponed due to a stampede that reportedly killed over 30 and injured nearly 200.Soleimani was designated a terrorist by the Obama administration in 2011. As the powerful and elusive commander of the influential Quds Force in Iran’s Islamic Revolutionary Guard Corps for over 20 years, Soleimani had led its fighters in operations throughout the region, backing Syrian President Bashar al-Assad and supporting Shiite militia groups in Iraq, including against U.S. troops during the Iraq War. The U.S. Department of State said Soleimani’s forces are responsible for the deaths of over 600 American troops because of the kind of explosive devices they helped bring to Iraq. The Trump administration has argued that Soleimani’s death was critical to thwarting “imminent attacks” the Iranian commander was helping to plot against U.S. personnel in the region. Pompeo has said that Soleimani was a “bad guy” and that the world is “safer” without him, given the hundreds of American soldiers whose deaths his forces are responsible for. The Trump administration, however, has provided no evidence of those imminent attacks.”We have nothing against the American people,” Zarif said during Tuesday’s interview with ABC News, adding that Soleimani “did a lot to protect the American people and the rest of the world from the scourge of Daesh,” using the Arabic acronym for ISIS. “But their government is taking them into the abyss and they should take charge of their own destiny,” he continued.Zarif noted that “Iran has never put U.S. civilians on its target list,” indicating that his country’s retaliation could be against U.S. military targets. When asked if he had a message for U.S. President Donald Trump, Zarif said, “He should stop going on this path, it will not help. Stop listening to arrogant, ignorant people.” Copyright © 2020, ABC Audio. All rights reserved.

Coronavirus live updates: California calls for pausing use of Moderna vaccine lot
At least 21 states activating National Guard troops in capitals to prepare for possible attacks
“I’d be up for that!” Liam Neeson wants to re-join the ‘Star Wars’ universe with Disney+’s ‘Obi-Wan Kenobi’ show
‘WandaVision’ star Paul Bettany on his father’s struggle to come out of the closet
In scathing draft of letter never made public, Trump chided James Comey for ‘erratic,’ ‘self-indulgent’ conduct
Giuliani says he won’t represent Trump at president’s impeachment trial