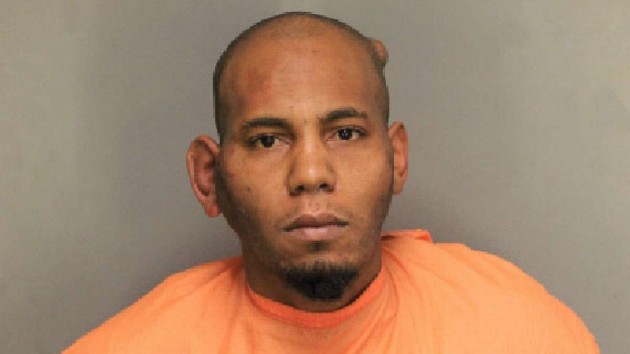 Florence County Detention Center(FLORENCE, S.C.) — Authorities have charged a man in the fatal shooting a young South Carolina police officer during a traffic stop over the weekend. James Edward Bell, 37, was charged with murder, discharging of a firearm into a vehicle and possession of a weapon during a violent crime on Monday, one day after he allegedly shot and killed an airport police officer. Police officer Jackson Ryan Winkeler, 26, was conducting a traffic stop at the Florence Regional Airport, located about 80 miles east of Columbia, when Bell allegedly opened fire and fled the scene, according to police.Winkeler was found dead on the ground outside of his police vehicle. His weapon was missing, but police found an empty 9 mm handgun and more than 30 shell casings nearby, according to an arrest affidavit. Bell was later captured in a car lot near Effingham, about 12 miles south of Florence, by Florence County sheriff’s deputies following a brief chase. Deputies found the slain officer’s gun in Bell’s possession along with a magazine that matched the handgun left at the scene, the affidavit said.Winkeler was the first police officer killed in the line of duty in the United States in 2020, according to the Officer Down Memorial Page website. In 2019, 134 U.S. law enforcement officers were killed in the line of duty, including 47 who were shot to death, according to the memorial page. Family friends remembered Winkeler as a caring person who dedicated his life to serving others. He also volunteered with the Latta Fire Department and would frequently post on Facebook, asking friends and family to participate in events for charity, people close to him said.”He lost his life doing what he loved the most: helping people. Jackson was one of the best firefighters that you could ever have on a fire scene,” Dillon County Fire Lt. Nic Bethea told Florence ABC affiliate WPDE-TV. “No matter what time of the day it was, Jackson was willing to help. Jackson had a heart of gold. From myself and all of Dillon County Station 2 firefighters, we will continue praying for the family. Latta Fire 23 will forever be Jackson Winkeler.” The Florence County Sheriff’s Department released a statement in the wake of the officer’s death, asking the public to keep his family in their prayers.”This morning our community has been again shocked by an act of violence directed at one of our local Law Enforcement officers,” the statement said. “We ask that the community please keep Jackson Winkeler’s family, friends, and coworkers in their prayers as they process what has occurred.” “They have our deepest sympathy and we will be assisting them in any way possible,” it added. Police are still investigating and have not released a possible motive in the shooting. Copyright © 2020, ABC Audio. All rights reserved.

Phil Spector, legendary producer-turned-convicted murderer, dies at 81
Pelosi declines to say when she will send impeachment article to Senate
Lebanon enacts all-day curfew after new surge in coronavirus cases
FBI discusses possibility of explosive devices at expected protests linked to inauguration
DC police officers speak out after US Capitol siege: ‘I thought … I might die’
Joanne Rogers, widow of Mister Rogers, dies at 92