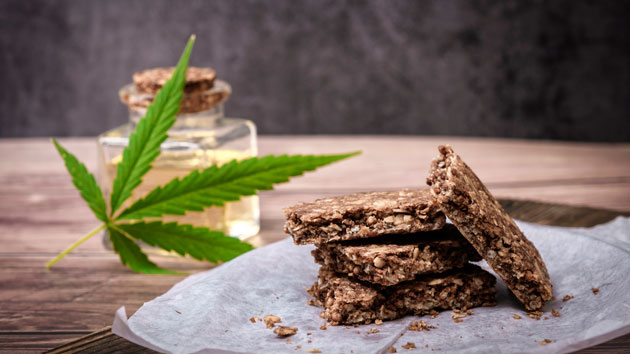 iStock(NEW YORK) — Cannabis edibles were poised to become the next big health craze — but science is saying to be aware.Weed edibles have been legal recreationally in Canada since October and are on the cusp of being widely available to the public. They’re also popular, according to the 2019 National Cannabis Survey, with 27% of Canadian respondents who used cannabis reporting they’d eaten edibles during the previous three months.In the U.S., 11 states and Washington, D.C., have legalized recreational marijuana, with more states expected to go fully legal in 2020.With the prospect of even more edibles being consumed by the public this year, physicians and health experts are warning that consumers should tread lightly: edibles might seem safer than vaping or smoking, but they also carry unique risks, according to a commentary published Monday in the Canadian Medical Association Journal.The foremost concern, according to coauthors Jasleen Grewal, a physician, and Lawrence Loh, a public health researcher, both from the University of Toronto, is the potential for eating too much. Edibles’ psychoactive effects can have a delayed onset of up to four hours after consumption. Coupled with the fact that those effects can last longer than inhaled cannabis — for more than eight hours, in some cases — there’s a heightened potential for consumers to pop one weed gummy too many.Cannabis-naive individuals, the authors write, are “particularly at risk” for overdoing it, even if they follow the dosing recommendations on the package.Another notable risk is the potential for children to accidentally consume edibles. One study found that after edibles became legal in Colorado, poison control centers in the state saw a 70% increase in calls about accidental cannabis exposure among kids.The authors also pointed to the potential for youth exposure in general to cannabis edibles, which has been correlated with impaired brain development and poor mental health,according to the Canadian Centre on Substance Use and Addiction.Adults older than 65 are another vulnerable group, since they may use cannabis to manage chronic conditions, the authors note, putting them at risk for cognitive impairment, falls, and interactions with their prescription drugs.Moreover, a recent meta-analysis published in the United States, which examined data from 83 studies over the course of 40 years, found that medical marijuana posed more risks to people with mental health disorders — including depressive disorders, anxiety disorders, attention-deficit hyperactivity disorder, Tourette syndrome, post-traumatic stress disorder and psychosis — than benefits.For people with schizophrenia, for example, cannabis can exasperate psychosis, researchers found.There’s a role for physicians in this new landscape, they add, advising doctors to “routinely question patients who ask about cannabis” about child safety, accidental overconsumption, potential drug interactions and the risks of eating edibles and driving.Copyright © 2020, ABC Audio. All rights reserved.