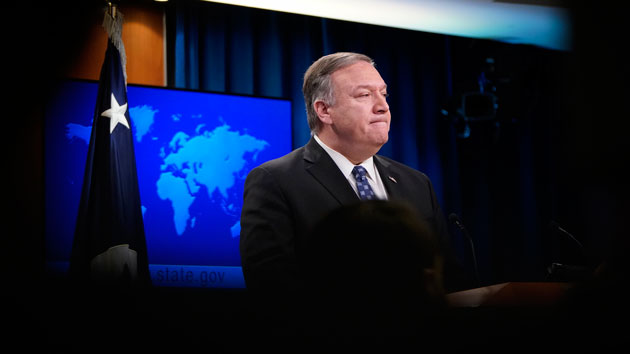 Win McNamee/Getty Images(WASHINGTON) — The Trump administration is facing scrutiny over its claim that Iranian general Qassem Soleimani was plotting an “imminent attack” on U.S. diplomatic and military personnel in the region, which senior officials, including Secretary of State Mike Pompeo and Defense Secretary Mark Esper have said was grounds for the U.S. drone strike that killed him last week.Senior State Department officials said Friday that the plots had the potential to kill hundreds of American officials in Iraq, Syria, Lebanon and elsewhere in the region. But some lawmakers, who received a classified justification for the strike on Sunday, have cast doubt on the intelligence that the administration has cited and said that classified justification doesn’t match what Pompeo and others have said publicly.”I don’t think there was really anything in that submission that ought to give people confidence that it was either days or weeks or months. It just was really not, I think, fleshed out at all,” Rep. Adam Schiff, chair of the House Intelligence Committee, told MSNBC’s Andrea Mitchell on Tuesday.Pompeo, who has been the administration’s public face defending the strike in a series of television interviews and phone calls with foreign counterparts, first said Friday that Soleimani was in Iraq as part of an “imminent” threat to Americans. A senior State Department official later told reporters Soleimani’s death “slows” any plot “down” and “makes it less likely.”Esper doubled down on that in an interview with CNN Tuesday, saying Soleimani was caught “red-handed” with plans to attack Americans that could have taken place in “only a matter of days,” if not weeks.”I can assure you that it’s more than razor thin, and it’s persuasive,” he said of the U.S. intelligence.But Pompeo seemed to walk those claims back slightly, telling reporters at the State Department earlier on Tuesday that the U.S. detected “continuing efforts on behalf of this terrorist (Soleimani) to build out a network of campaign activities that were going to lead potentially to the deaths of many more Americans.”That nuanced answer made it seem Soleimani was less connected to any plans and those plans less imminently threatening to U.S. interests.”If you’re looking for imminence, you need look no further than the days that lead up to the strike,” Pompeo added, alluding to the assault on the U.S. embassy in Baghdad and then specifically pointing to Soleimani’s “terror campaign in the region” in Iraq, Syria and Lebanon and the rocket attack on an Iraqi base that killed an American civilian contractor in late December.Schiff and other Democratic lawmakers have said that does not point to an imminent attack that justified, at this moment in time, killing Soleimani, the commander of Iran’s elite Quds Force who was designated a terrorist by the Obama administration and is blamed for the deaths of over 600 U.S. service members during the Iraq War.”There’s a big difference between something that may take place in days and something that may take place in months, and the idea that, ‘Well, no, this was a retaliatory strike against past conduct’ — which is it?” Schiff said.Copyright © 2020, ABC Audio. All rights reserved.

Yemen, on brink of collapse, may suffer further after Trump decision on Ansar Allah
“I was just trying to keep warm!” Bernie Sanders laughs on ‘Late Night’ about his meme-ready picture
COVID-19 delays strike again: ‘No Time to Die’, ‘Morbius’, and ‘Ghostbusters: Afterlife’ all bumped again
Jane Krakowski loves ‘Dickinson”s spin on the poet
Olivia Jade returns to YouTube after over a year, “I can’t change the past”
Coronavirus live updates: US reports over 188,000 new cases