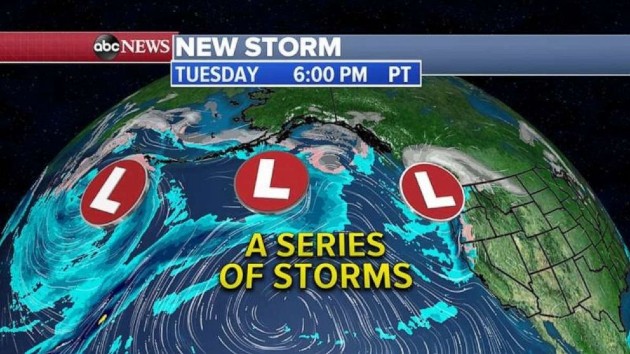 ABC News(NEW YORK) — Up to 18 inches of snow has already fallen in the Cascades and more than 3 inches of rain in the lower elevations. Heavy wet snow has downed dozens of trees in Washington producing some power outages. On Tuesday morning, storms continue to line up in the Pacific and are ready to slam the West coast with more rain and mountain snow.Through the week, western storms will make their way south and east and will stretch from southern California all the way to the Great Lakes. By Friday, a strong storm will move from the West into the central U.S. and will combine with Gulf of Mexico moisture to produce a severe weather outbreak across the South with damaging winds, hail and tornadoes possible.Further north, heavy rain could cause flooding in the Ohio Valley. Further west, snow will develop from Colorado to western Great Lakes. Meanwhile, a storm system moving through the east later Tuesday will bring a quick hit of snow from Virginia to eastern New England. Washington, D.C. and Baltimore will get some snow as well Tuesday afternoon and Philadelphia should expect some snow in the early evening. New York City will see rain changing to snow after rush hour and Boston will see snow later Tuesday night into the overnight hours. By Wednesday morning, the quick-hitting storm should be moving out of the Northeast with lingering snow in Boston and eastern New England. Not too much snow will fall in the Northeast but the highest snowfall totals will be in West Virginia and central Pennsylvania where some areas could see 3 to 4 inches of snow.The rest of the Northeast will only see a dusting to maybe 2 inches. Major cities like Washington, D.C. will see maybe 1 inch, Philadelphia a dusting to 1 inch, New York City a dusting, and Boston around 1 inch. Copyright © 2020, ABC Audio. All rights reserved.