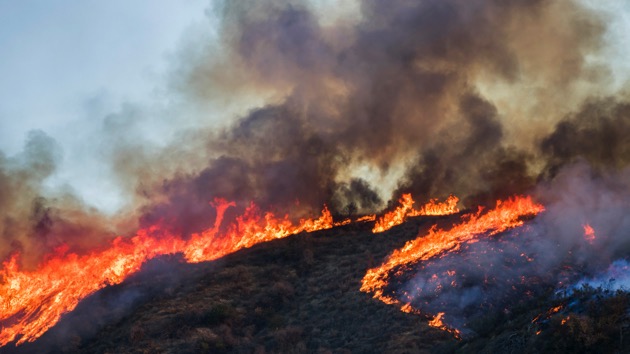 Erin Donalson/iStock(SYDNEY) — With more than 100 fires still burning in Victoria and New South Wales, Australia, rain would seem like a welcome relief.But for firefighters battling the blazes, the wetness makes it nearly impossible for them to properly put the flames out — leaving little solace in an already devastating situation.The spotty rain hitting the region does not allow firefighters to back burn, which is the essential process of setting fires to control the progress of the bushfire and, in turn, putting a stop to them entirely, Inspector Ben Shepherd with New South Wales Rural Fire Service told ABC News’ chief meteorologist Ginger Zee on Tuesday.A backfire is intentionally set in front of a wildfire and is used to prevent the fire from spreading, according to the International Association of Fire and Rescue Services. The backfires consume some of the combustible material and creates a belt that the wildfire can not easily penetrate, according to the association.The wetness hinders the fuels and makes it harder, if not impossible, to begin back-burning, he said.”[The rain] is slowing down the fire, but the fire is very much still burning,” Shepherd said. “It’s definitely not enough to extinguish it.”The current conditions in Australia — lower temperatures, high humidity and lower winds — would normally be conducive for the back-burning process.However, with the rain, “it’s putting a real pain in the fact that we can’t actually light the fire in front of it,” according to Shepherd.In order for the rain to subside the flames, the country would need a long and steady fall, which is not in the forecast.”It’s an incredibly difficult and dangerous situation,” Shepherd said.The soil itself is also rejecting the rainfall.Due to the intensity of the country’s prolonged drought — the worst in Australia’s recorded history — the soil has become hydrophobic and the rain can’t soak into the ground.The country’s wildfires began in September and will likely last for several months as the hot weather continues.Temperatures are expected to rise this weekend and winds will increase, helping fuel the flames.The fires have left at least 25 people dead and more than 2,000 homes destroyed, Australian Prime Minister Scott Morrison said Monday. Over 12 million acres have burned in Australia since the start of the fire season.Wildlife has also been ravaged.An estimated 480 million animals have died in the fires in New South Wales alone, the southeastern part of the country that has been hit especially hard, according to ecologists at The University of Sydney.”The fires have also been devastating for Australia’s wildlife and wild places, as vital areas of bush, forests and parks have been scorched and many millions of animals killed or injured,” Dr. Stuart Blanch, senior manager land clearing and restoration with World Wildlife Fund-Australia, told ABC News. “Until the fires subside the full extent of damage will remain unknown.”The Insurance Council of Australia said Tuesday the estimated damage bill with insurance claims has reached $485 million, while Morrison said Monday that the government was committing an extra $1.4 billion toward the recovery effort.The disaster in Australia has caught nationwide attention, with celebrities donating hundreds of thousands or even millions.President Donald Trump spoke with Morrison on Tuesday about the fires.In a tweet, Morrison thanked Trump for the call and for his “strong messages of sympathy, support and friendship for Australia during our terrible bushfire season.””We love Australia,” Trump wrote back.Copyright © 2020, ABC Audio. All rights reserved.