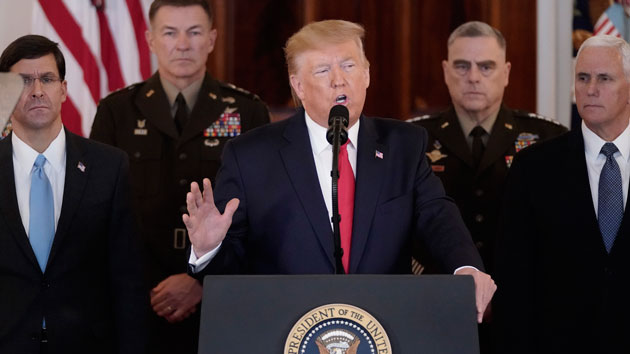 (WASHINGTON) — President Donald Trump addressed the nation Wednesday morning from the White House, de-escalating a crisis with Iran following its missile strikes overnight on two bases in Iraq where U.S. troops are stationed.”I’m pleased to inform you the American people should be extremely grateful and happy,” Trump said. “No Americans were harmed in last night’s attack by the Iranian regime.”Trump announced that the U.S. would be imposing “powerful” and “punishing” economic sanctions against Iran, but refrained from any immediate threats of military action against the Iranian regime even though he had said he would strike back if Iran attacked the U.S.”As we continue to evaluate options in response to Iranian aggression, the United States will immediately impose additional punishing economic sanctions on the Iranian regime,” Trump said. “These powerful sanctions will remain until Iran changes its behavior.”Since withdrawing the U.S. from the nuclear deal in 2018, Trump has placed Iran under crippling economic sanctions, ramping up enforcement efforts last April to push Iran’s oil exports — its economic lifeblood — down to zero. To drive the U.S. back to talks and a wedge between Washington and its allies, Iran has conducted a series of escalating attacks in the region directly and through proxies, including on oil tankers, a Saudi oil facility and U.S. troops in Iraq — killing one American civilian contractor.The killing of an American crossed a red line for Trump, who ordered the killing of Iranian Gen. Qassem Soleimani last Thursday in response.While Iran is already under heavy U.S. sanctions, the White House could order more individuals, businesses and government agencies to be designated, according to analysts. Last May, Trump authorized sanctions on Iranian iron, steel, aluminum and copper sectors, which the White House said comprise 10 percent of Iran’s export economy, but those have so far not been used.”Sanctions now touch every part of the Iranian economy and are unlikely to have any further impact,” Ryan Fayhee, a former senior Justice Department prosecutor who handled sanctions cases, told ABC News, suggesting instead that only secondary sanctions — targeting foreign businesses from Russia or China, for example — would have additional impact now.Trump was joined during his remarks by Vice President Mike Pence, Secretary of State Mike Pompeo, U.S. Secretary of Defense Mark Esper, Joint Chiefs Chairman Gen. Mark Milley and the other Joint Chiefs.”Our great American forces are prepared for anything. Iran appears to be standing down, which is a good thing for all parties concerned and a very good thing for the world,” Trump said.In a statement released on Sunday, Iran announced it would no longer limit the number of centrifuges it has in production, calling it the “last key item of its operational limitations in the JCPOA,” or the Joint Comprehensive Plan of Action, as the nuclear deal is formally known.The president addressed this announcement saying that the deal was set to expire shortly anyways and that this gives Iran a “clear and quick path to nuclear breakout.””[Iran] must now break away from the remnants of the Iran deal or JCPOA, and we must all work together toward making a deal with Iran that makes the world a safer and more peaceful place,” Trump said.

President Trump: "Iran appears to be standing down, which is a good thing for all parties concerned and a very good thing for the world." https://t.co/ldmNa7FdiK pic.twitter.com/ux1Wli6ZDH

Trump also called on NATO to have a “much more involved in the Middle East process,” although the president has had a somewhat tense relationship with NATO allies and has reportedly discussed privately pulling the U.S. from NATO.

The president announced the planned address in a tweet Tuesday night, reacting to Iran’s strike on two facilities in Iraq in an upbeat tone as initial assessments showed there had been no U.S. causalities as a result of the retaliatory attack.”All is well! Missiles launched from Iran at two military bases located in Iraq. Assessment of casualties & damages taking place now. So far, so good! We have the most powerful and well equipped military anywhere in the world, by far! I will be making a statement tomorrow morning,” Trump tweeted.The president’s tweet represented a departure from his tougher rhetoric earlier in the day, when he warned “If Iran does anything that they shouldn’t be doing, they’re going to be suffering the consequences and very strongly.”Iran launched the attack in retaliation of the U.S.-ordered killing of top Iranian commander Qassem Soleimani last week. President Trump and the broader administration have said Soleimani was working to orchestrate an “imminent” attack targeting U.S. personnel and facilities in justifying the killing, though Democrats have been raising questions about what evidence the administration has that an attack was indeed “imminent” and the administration has so far refused to declassify that intelligence.The president’s address came at perhaps a pivotal moment for Trump, who was elected to the White House three years ago on a promise to untangle the US from endless wars in the Middle East. But on the dawn of an election year, the president’s killing of Soleimani has brought the U.S. closer to the brink of expanded military conflict in the region. Copyright © 2020, ABC Audio. All rights reserved.