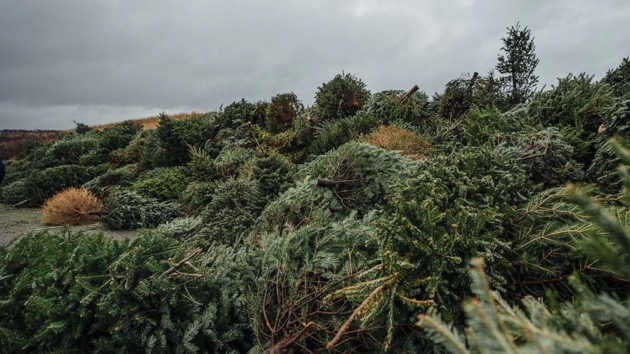 New Jersey State Parks(BERKELEY TOWNSHIP, N.J.) — When New Jersey park officials asked residents to donate their Christmas trees for a sand dune restoration project, they hoped for some 200.Instead, throngs came out and more than 2,000 trees were donated in total, according to the New Jersey State Park Service.”We had a small project in mind. The response was just incredible,” Jenifer Clayton, the superintendent of Island Beach State Park, where the trees will be put to use, told ABC News on Wednesday.The Christmas trees will be used to help improve the dune system along the coast in New Jersey as erosion levels rise, according to Clayton.The trees’ branches help anchor sand caught up in the wind to the dunes. The sand accumulates, rebuilding the dunes at a faster rate than would occur naturally.The outpouring of donations from the community was an unexpected but welcome surprise. Clayton believes social media helped spread the message.”All of [the trees] are gonna be put to great use just because of all the damage we have been getting,” Clayton said.She attributed the rise in erosion to higher tides, rising sea levels and climate change.Island Beach State Park is located in Ocean County, about 70 miles north of Atlantic City. More than 20 New Jersey beaches saw significant erosion after Subtropical Storm Melissa in October 2019, including the nearby Long Beach Township in Ocean County, according to NJ.com.Clayton said the response will hopefully alert more people to the effects of climate change and show them ways in which they can help.On Saturday, volunteers will place the trees at multiple dunes, according to the New Jersey State Park Service. Copyright © 2020, ABC Audio. All rights reserved.

Independent investigation underway after Tacoma Police officer hits at least 1 pedestrian with patrol car
Station wagons are back. And they’re faster than ever
Yemen, on brink of collapse, may suffer further after Trump decision on Ansar Allah
Turbulent week of weather ahead with 3 different storms tracking across US
Coronavirus live updates: University of Michigan pauses all sports after positive tests
7,000 National Guardsmen to remain in Washington through mid-March